I gotta admit, these weren’t immediately tempting when I saw them on Pinterest… 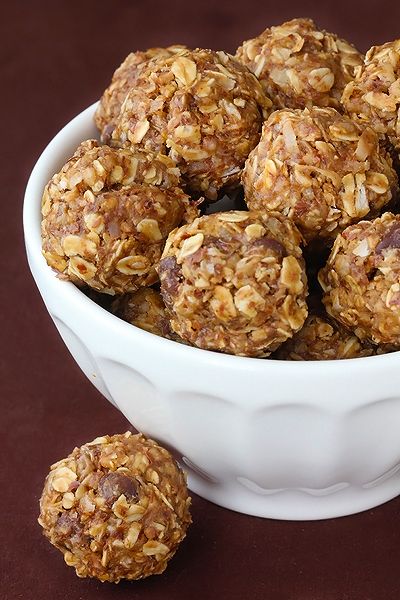 The original author of this post made them for a “quick hop up to Breckenridge.” All I’m taking is a quick hop up the stairs to change the sheets on the guestroom bed, but you know, that takes energy, too. Also, I had all the ingredients! Since that is the only time this will ever, ever happen, I took photographic evidence. 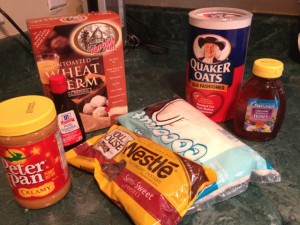 To begin with, I was a little bit dubious about this recipe. We know how the last balls with coconut in them turned out. Buuut, it gives me the opportunity to write the word “balls” in a post numerous times, so that kind of makes any result worth it.

I got to mixing my ingredients, and I will tell you what, I think I used every measuring cup I had to get all this stuff in here. 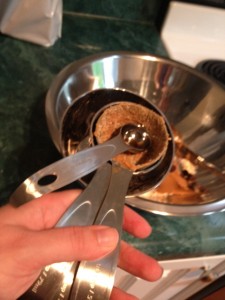 Also, all my mixing bowls were dirty, so this one happened in my giant popcorn bowl. 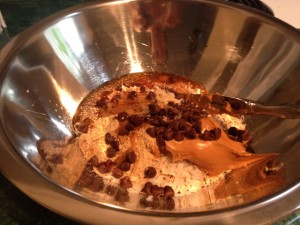 I couldn’t figure out how to mix all this stuff together, really, and there were no specific instructions in the original post, so I did what any self-respecting no-bake cook would do. I used my hands. It was sort of therapeutic, actually. I have no photographic evidence of this step, however, because I was flying solo on this one and there was no way I could nab a pic without permanently encrusting my photography device in sticky ball-slime.

But here’s what it looked like when it was all mixed up: 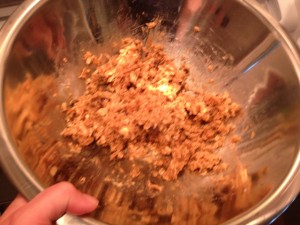 Were you thinking cat vomit? Yeah, me too, kinda. Gotta say, at this point, I was not overly excited about these things.

I popped it in the refrigerator for half an hour, as instructed, and then got it back out and rolled balls. Many, many tiny balls. Balls as far as the eye could see. I made 30 teensy little gerbil balls out of this batch.

Anticlimactically, these did not fail spectacularly. They are actually pretty good. Sort of like a tiny Cliff bar. But do they give you energy? Meh. I ate two or three and then went to bed, so you be the judge.

The verdict? If you don’t mind eating a thing that looks like a cat vomit meatball, go for it. They’re actually not terrible.

(Damn right that’s a bottle of gin in the background. That’s how I roll. Meaning that I roll via not putting shit away in the kitchen before I take photos for my blog.)