Friends, I sometimes suffer from aspirational food cooking. Do you know what that is? It’s actually a thing. Oprah says so. It’s when you make foods that you hope will turn you into someone you’re not. Anyway, one such aspiration is that I will learn how to cook foods from a variety of countries and flavors, and it will be delicious, and my Southern born-and-raised spouse and I will absolutely love it. So I tried veggie laksa soup, which is a coconut based noodle concoction. 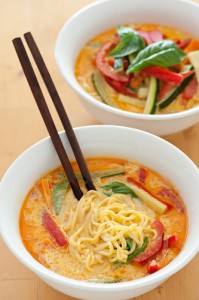 In hindsight, I realize that the coconut-based part should have given me pause. That actually sounds sort of revolting to me even now. But I wanted to be zen and worldly, and maybe even eat that shit with chopsticks.

So I made some.

Probably the first problem was that I could not find anything in the grocery store labeled Singapore noodles, so I got something that looked sort of like Ramen noodles except without the flavor packet, and figured it was close enough. Probably the second problem was that I did not have laksa paste. Or Thai curry paste. But I did have Indian curry paste. And, again, I figured it was close enough.

I’m not going to tell you that this soup was the worst thing I ever ate. It was not. It was actually edible, for the first few bites. But it was very, very sweet. I mean, like, picture Elf spaghetti.

And so, after a few bites, both my spouse and I abandoned our soupy syrup noodles in favor of just eating the noodles without anything on them. (We looked just like Hugh Jackman and Ashley Judd. Promise.)

So, this is not so much a recipe fail as an aspiration fail. I will probably never be the kind of person who appreciates flavors from all over the world and gets all zen about noodles with ice cream on them.

To see more of Pintester’s tests (most of which are also CraftFails), check out her blog at Pintester.com.