For those of you in the U.S. with me, happy Memorial Day! Since Memorial Day is sort of the unofficial kick-off for summer, I thought I’d try out something from my Summer board today: sand dollar cinnamon sugar cookies. 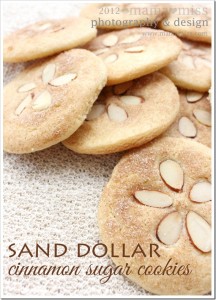 Past sugar cookie operations have not gone according to plan. Also, you will note from previous entries that I am a useless sack of dicks in the kitchen, and precision is my baking downfall.

So I did not have high hopes for this, especially considering it’s a sugar cookies from scratch recipe. But I gathered my supplies. 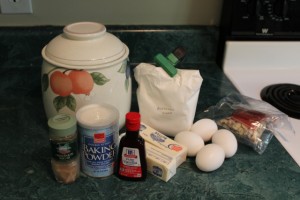 There is one fairly high skill-level kitchen task which I can accomplish without fail and without the use of special tools nearly every time: I am an egg separating prodigy. I only use the shells and can separate them without breaking the yolk pretty much every time. So I did that first. Here is proof that I did not fuck it up: 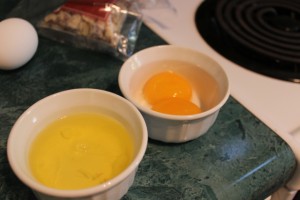 Ask me to “cream together” softened butter and powdered sugar, though, and I scratch my head and utter something akin to, “Beh?” Number one: I don’t know exactly what constitutes “softened” butter. I sort of half-melted mine and called it good. Number two: I don’t know what “cream together” means so I just threw it in my KitchenAid and mixed it. 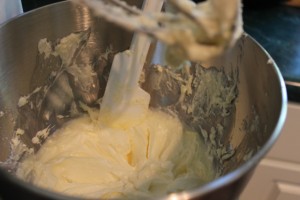 Also, I never buy unsalted butter, so this was salted butter, but I figured it would all even out if I just left out the pinch of salt the recipe called for, right?

Then I added the dry stuff and only sprayed some of the fine flour-dust around the kitchen because I turned the mixer on too high too fast. But that’s just part of baking… I think… 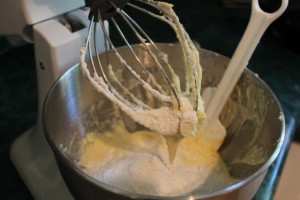 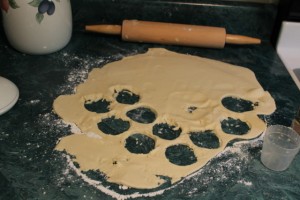 I probably should have waited. It was super sticky, but the biggest problem was that it was really hard to pick up the cookies once I cut them and they sort of got squished in transport from the counter to the cookie sheet. I performed some field medic magic and did the best I could putting them back in a round shape, but after two sheets, I gave up and put the rest of the ball back in the refrigerator. So, on the plus side, I can dirty up my kitchen again tomorrow with a new batch of these fuckers.

Also, it takes for-freakin’-ever to find the most perfectly shaped almond slivers and arrange them in a star-shape on top of less-than-perfect circle cookies. 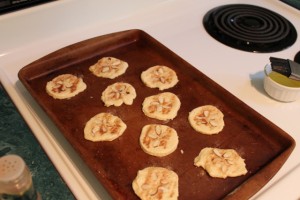 But I did it. I persevered. For two sheets of cookies, anyway. Then I was like, “Fuck this shit, I’m goin’ swimming.” Except then I didn’t go swimming because it was sort of cold… but I did drink rum, so close enough.

ANYWAY. The crucible of the oven (ha, literally) reshaped these things into something a little less horrifying and I actually wasn’t too embarrassed to share these with people. 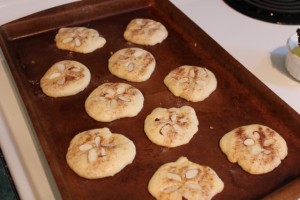 I did wait to bring them out until everyone else had also had a few rum drinks, though. And they tasted pretty damn delicious, if I do say so myself. I guess it’s hard for cookies made up of largely butter and powdered sugar to taste bad.

Just a quick note about The Pintester Movement: Thank you, thank you, thank you to those of you who have signed up! As of the writing of this post, I have 133 participants! Amazing! There is still time to sign up if you want to– go for it! And don’t worry if you haven’t heard from me yet. I’m going to send all participants an email tomorrow with instructions, links, and a few other goodies for your post, which should go up on May 30 (so we all post our stuff on the same day!). Thanks again!