So, hey, remember when I asked you guys if it would be ok if I reviewed stuff on here and you said, sure ok, we guess so? Well today is my very first review!

Westside Wholesale was kind enough to send over a really fancy Speakman shower head for me to try out.

I have a cute guest bathroom upstairs that’s sort of en-suite with the guestroom. Mostly, it stays unoccupied except for my dog, who loves to lay on the guest bed all day long. (She thinks I don’t know.) But whenever my parents come to visit, they use it, so I probably should have done something with the shower head in there by now…

This thing has been in there since we moved in like 8 years ago. 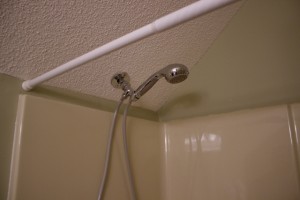 That’s because neither my husband nor I are into the whole home renovation thing, except that we really like to watch renovation shows on HGTV and stuff. The extent of my home improvement projects has been to help paint one room in the house since we moved in, and I got so frustrated that I cried, and then I was banished and forbidden ever to help with painting again.

Anyways, the shower head is definitely not pretty, and it’s sort of functional, although we never use the hose part of it at all. Also, you can see the ceiling is a little slanted in this bathroom because of the roof gables, so it sticks out at a weird angle. Tall people, you know what I mean. There is nothing worse than getting in the shower and having to crouch to wash your hair. (Ok, well, waxing your own legs is probably worse. And, you know, dropping your phone in the toilet— that’s definitely worse. But my point is that it’s pretty bad.)

So the new shower head was pretty exciting. 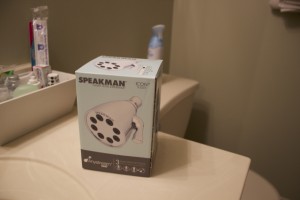 I enlisted my husband to help with the installation because he thought unscrewing the old shower head and screwing on the new shower head would be way too difficult for me, you know, since I don’t have any skills in the screwing department. (Wait…)

So this is what it looked like when he took off the old one: 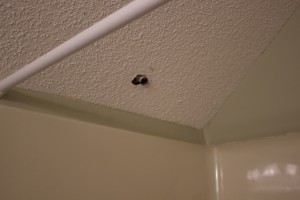 Apparently, when you screw a shower head onto the pipe, you use a tape sealant to make sure there aren’t any leaks. My husband already had some tape sealer stuff in the abyss of the garage, but had I opted to do this project myself, I really would only have needed a wrench, because the non-leaky tape stuff actually came in the box along with the shower head. 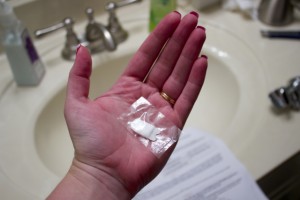 So no need for that mid-project run to the hardware store, which is pretty awesome and saves about 45 minutes on the installation time, if you’re me. (Seriously, the last plumbing adventure at our house took an entire day of trips back and forth to the hardware store, and ended in both of us under the sink at the same time, screaming obscenities. So this is a vast, vast improvement.)

My husband skillfully taped the shower pipe. Look at this tape prowess: 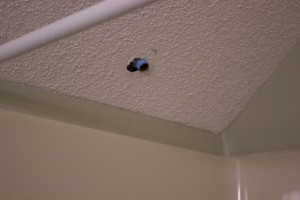 I am sure I am way too much of a spaz to apply tape to a pipe. Good thing I have him around.

Then he screwed on the new one. 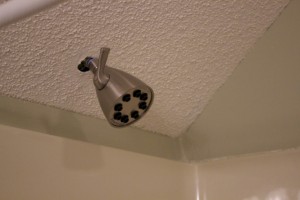 And put the metal hole-covery thingie that we were using with the old shower head back on the ceiling to, you know, cover the hole. 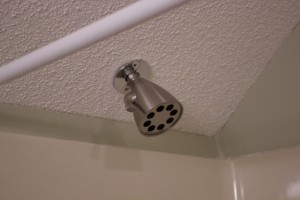 And then it was done. The whole thing took less than 10 minutes from walking up the stairs to walking down the stairs and throwing the old shower head in the dumpster.

I love the new shower head. It swivels all around, so no more tall people issues, and that little handle on the left lets you control exactly how you want the water to spray. It’s really nifty, and I can’t wait to hear what my parents think of it on their next visit here. 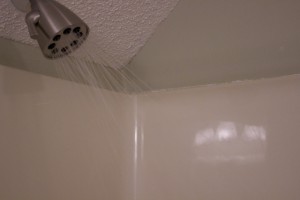 If you must have one of these for your very own, you can pick one up at Westside Wholesale. They have a lot of other cool stuff to buy there, too, including more house stuff, and some other neat things. (My husband was ogling the knives pretty hard.) If you’re looking for Christmas gifts and you’re a last-minute shopper like me, you can also search the inventory for Quick Ship items, which leave the warehouse the same day you order them.