(Alternate title: She Eats Poop, But Her Treats Should Totally Be Organic)

I understand that people love their pets. Really, I do. I have been known to defend my dog when she is accused of doing doggie things like shitting in the house (“She would never!”) or slobbering on people (“She’s just giving you sweet kisses.”).

But I’ve always had trouble understanding homemade dog treats. I don’t make homemade people treats as a general rule, and I love my dog, but I don’t love much of anyone enough to bake for them, dog included. Still, I am your intrepid Pintester, and there are things that must be tested, homemade dog treats among them.

This is Sydney, sweet doggie and taste-tester: 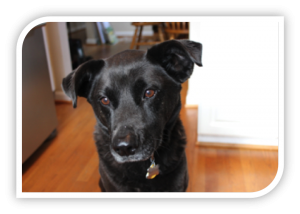 There is a veritable plethora of dog treat recipes available online, so I, naturally, was drawn to the ones that had flavors I like, because—like any good pet owner—I assume that my dog is just a furry version of me. I found one recipe with bananas… 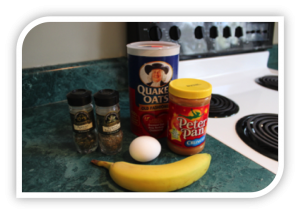 And then I found a very similar recipe that used canned pumpkin instead of banana. I think banana and pumpkin are both excellent flavors, so, as with most things in my life, I decided combining two good things would make one great thing. (This theory only works about 50 percent of the time, but I continue to trust it as fact.) 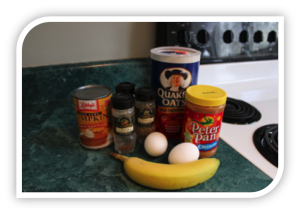 Both recipes are based on oatmeal held together with sticky things, so I figured I’d just halve the sticky things and then combine them. Ah, math. Ah, sticky things.

Plus, using only half a banana meant I got to eat the other half. 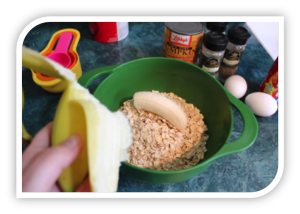 In the end, I came up with a solution. Instead of using my parsley, I went digging through my spice drawer and found that I had two spice bottles of dried sage, one labeled with “old,” presumably so that I would know to use that one first. 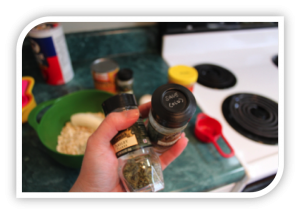 Except it doesn’t always happen that way because I live with a rude roommate who has food expiration date issues. (He is also my husband.) So I had about half a bottle of old sage and half a bottle of new sage. I decided to donate the old sage to the cause.

When it was time to add peanut butter, the dog got interested in the proceedings.

I have to pause here to take a little side-track. In Sydney’s old age, she began to get a little incontinent, but, luckily, the vet prescribed magical pills that completely alleviate the problem. Unluckily, Sydney hates the pills.

It used to be that I could get her to take a pill by wrapping it in cheese, but eventually she figured it out, and now she will not take cheese without inspecting it for a pill first. She has also been known to eat the cheese and leave the pill, a feat I was convinced could not be achieved without the use of opposable thumbs, but she proved me wrong.

Anyway, now she is highly suspicious of peanut butter in general, but she still likes it, so when she smelled it, she came racing into the kitchen to figure out what was going on. When I offered her some, she ran away, throwing a wounded, accusatory stare over her shoulder. (Furry version of me, remember?) 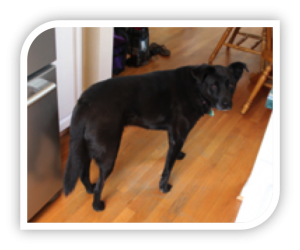 Owing to this, I maybe should have left the peanut butter out of these things, but whatever. 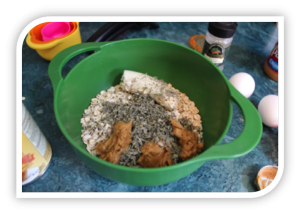 At this point, the whole thing smelled overwhelmingly like grass, not peanut butter, and Sydney likes grass and I have never tried to hide a pill in grass (although that’s not a bad idea, come to think of it), so I figured she’d be fine.

Next I added the pumpkin. 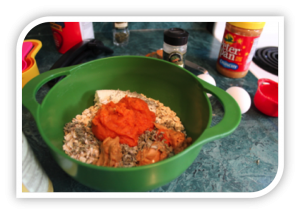 And then the eggs. 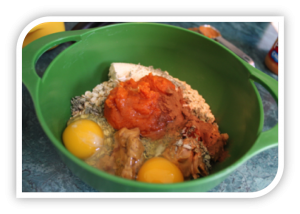 And then it was time to mix it all together. I did run into some trouble in that my banana was a little too fresh and would not mash with only a whisk as a tool.

We once took Sydney to the beach and she ate a whole bunch of sand and the next day she made a turd composed entirely of beach sand and it looked a little like this: 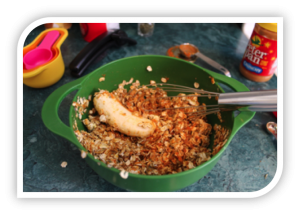 A potato masher fixed that right up, though. (The banana, not the sandy turd. The sandy turd sort of just took care of itself.) 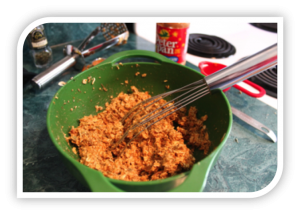 This mixture (I hesitate to call it dough, because, really, does it look like dough?) was pretty sticky and gross, so I stuck it in the refrigerator for a few minutes while I cleaned up and preheated the oven.

I decided on trying to roll it out and cut shapes. Really, it would have been best if I’d had bone-shaped cookie cutters. But I did have another shape of cookie cutter, sent to me by an adoring fan. Not exactly bone-shaped… 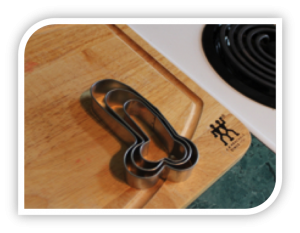 Anyway, even refrigerated, the dough-ish substance in no way looked like it could be rolled out. My mom tried to teach me to bake when I was little. She failed, but I do remember that flour is very important when you are rolling things, so I got some fucking flour, man. Go big or go home. 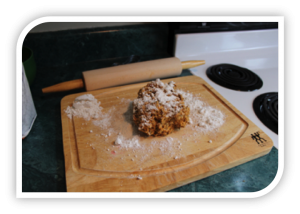 I’d like to tell you that it helped and I successfully rolled out a beautiful round of dough. I cannot tell a lie, though. 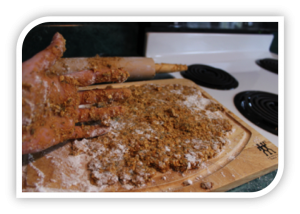 Still, it was more-or-less flat, so I attempted a few cookie cutter shapes. I made three-ish before I gave up. 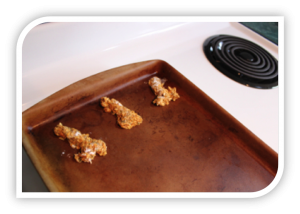 After that I just rolled them into balls and then squished them flat. 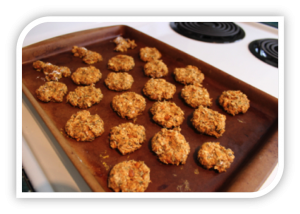 Into the oven they went, and I attempted to clean up the kitchen in the meantime, as it was covered with sticky-whatever. The dog, who had been avoiding me since the whole peanut butter scandal, came trotting back into the kitchen to inspect the garbage. 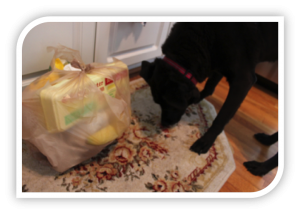 Yes, my dog is excited by the prospect of eating whatever is in that bag of three-day-old kitchen garbage, and yet I am making her homemade dog treats. The irony does not escape me.

Forty-five minutes later, grass-smelling lumps of crunch-turds came out of the oven. 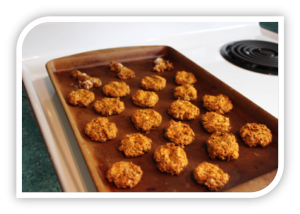 This time, Sydney was willing to sample them, probably because she couldn’t smell the peanut butter over the overwhelming stench of old sage. 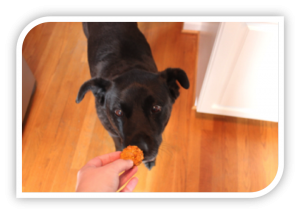 She was a little cautious about the first one, but then she began performing all of her tricks one after the other without commands in order to earn more.

So I’d say we have a dog-rated success on our hands. 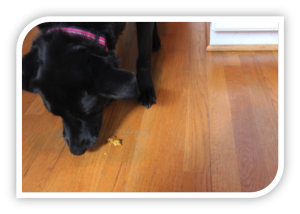 But I can’t just leave well enough alone and assume that these treats are a success just because my dog likes them. Who cares what the dog thinks anyway? Her palate is not exactly discerning. She eats trash and poop and drinks out of mud puddles, guys.

You know where this is going, right? I decided to try these myself. Here’s how that went: 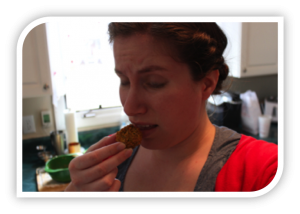 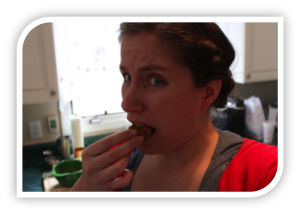 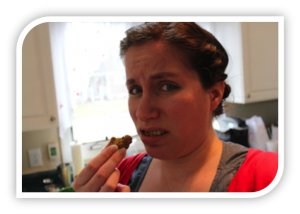 And then I stopped taking pictures because I had to run and go spit it out. Let me just say that these dog treats are not fit for human consumption. And let me also add that now I know why it does not bother my dog to lick her own anus, because I imagine dog anus probably tastes better than these dog treats.

Will I be attempting this again? No. Hell no. I mean, yes, the dog likes them, but they were a lot of work, I don’t have any more old sage, and I can’t eat them in a pinch, which seems important. Sorry, Sydney. You’ll have to put up with Milkbones, I guess. 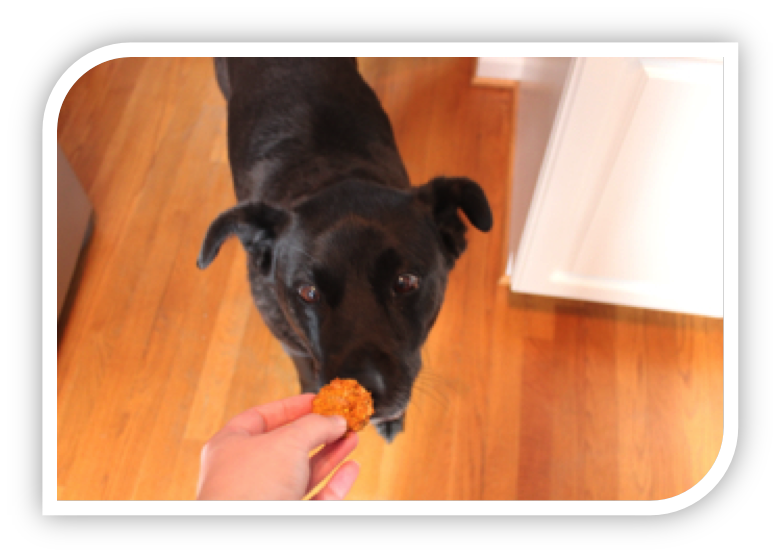