Ah, mug things. You know they tend not to go well. But does that stop me? Nope. Especially when I’m hungry. Just call me a raving optimist.

And today I had my sights set on macaroni and cheese. 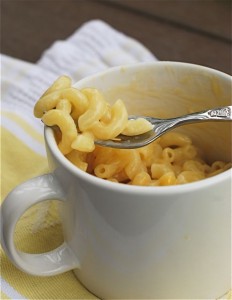 I’m not sure why this sounded appealing, especially since that Kraft shit barely lives up to the name macaroni and cheese. Blergh. But this promised to be easy and have real cheese, so, how bad could it be? (Famous last words.) 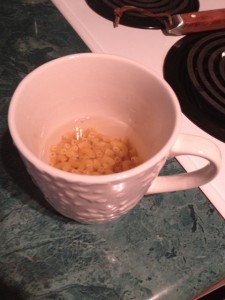 Now, the instructions do say that this is going to boil over and it’s “OK” if that happens. The hell it is. Stop boiling over in my damn microwave! 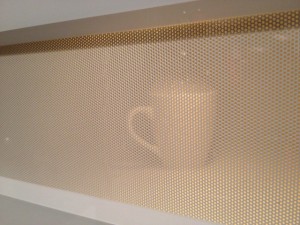 I don’t let my neuroses out to play too often, but when it comes to things exploding, boiling over, or otherwise fucking up my microwave, it’s on, bitch. You have no idea how hard it was to watch this happening and be “OK” with it. But it was for science. Breathe. For science.

I ended up putting my macaroni and cheese through three 2-minute cycles. It was not done at all after the second, and after the third… well… 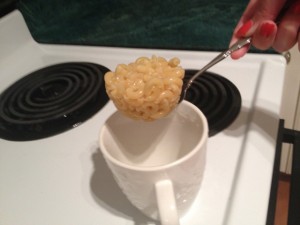 I reasoned that maybe the addition of milk and cheese would save it, so I pressed on. 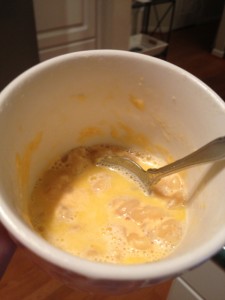 Yeah, so not exactly the kind of thing that makes you bubble over (as the case may be) with confidence.

Still, when you have a thing made with milk, cheese, and noodles, it can’t possibly be that bad, and so I ate it. And I was right– it wasn’t that bad… as in, I’ve had things that were worse.

Of course, the texture was sort of disturbing. The term “boiled snot” comes to mind. And I’m not sure that’s a term that would come to mind in any other case.

So I guess it’s sort of a toss-up between whether this mac and cheese or that Kraft shit wins the Worst Mac and Cheese Ever award. Maybe you should try it and judge for yourself. Ha.

« Previous PostPinteste Round-up: Glitter and Funnies Next Post »Getting Even