Did you all know that the world was supposed to end today? It was. And I went to an End of the World party last night because I had faith. But we’re all still here, dammit, and that means laundry-folding and bathroom-cleaning is on my list for today. I had neglected them for a time in lieu of gearing up to fight off an alien attack, but so it goes.

Anyway, for the party yesterday, I brought wine and pie. Which pie? This pie. 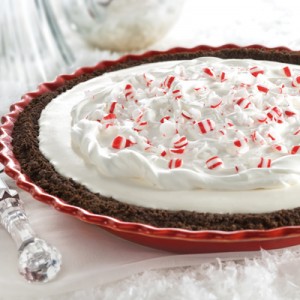 It’s a peppermint snow pie. Festive, right? Plus I had some leftover peppermints after my sort of failed candy tray test.

I also had some leftover gelatin. Yeah. The instructions said to “soften” the gelatin by mixing it with two tablespoons of boiling water. I don’t think I’ve ever boiled two tablespoons of water before, but I did for this. Because I’m dedicated. 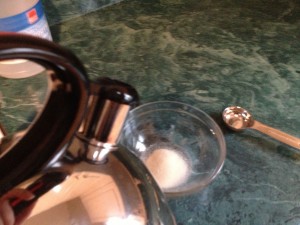 And then I was to add that “softened” gelatin to the heated evaporated milk. Apparently “softened” really means “generally booger-like in consistency.” That or I did it wrong. It’s a toss up. 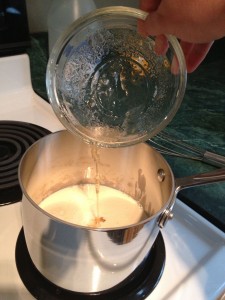 Then I stirred it up and measured out one cup of white morsels, which left half the bag. And then I put that half of the bag back in my pantry because I am trying not to eat too much crap over Christmas and goddamn it why did this recipe not just call for the whole bag? Do you know how crazy it’s going to drive me that there is an opened bag of white chocolate chips in my pantry that I am not eating? 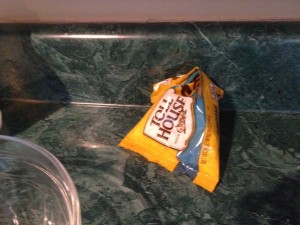 Once everything was all heated and mixed, I stuck it in the refrigerator to cool. These were the instructions, but it always seems to me that you shouldn’t put hot things in a refrigerator. I mean, what if you put it next to your eggs and they start to cook? Does that happen? 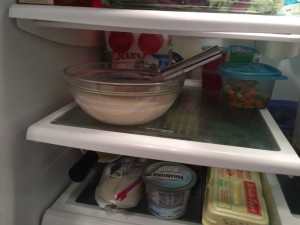 While the booger-gelatin mixture was cooling, I decided to smash up the peppermints. This proved to be a more difficult job than I had anticipated. First, I thought I’d just smash them with a meat tenderizer on my cutting board, but when they started flying across the room, I abandoned that thought. Then I got brilliant and put them in a plastic baggy and smashed them some more. That solved the flying problem, but I was left with a bag of mostly-pulverized peppermints and a few that were still whole. 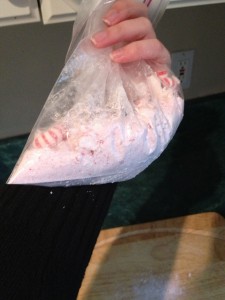 But, if there’s anything I know how to do, it’s try to save a really bad kitchen situation. (Sometimes it works, sometimes it doesn’t, but I always try.) So I picked out the mostly whole peppermints and saved those for the top garnish, and layered the rest on the bottom, figuring they’d probably get all mooshy and liquidy anyway. 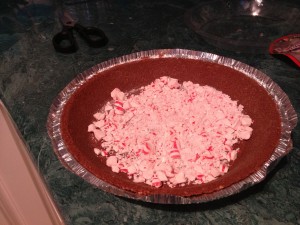 By the way, here’s my secret to a perfect pie crust every time: Buy it.

I was running late on time since this thing was supposed to set for two hours, so I took the goop out of the refrigerator before the prescribed 30 minutes were over, mostly because I figured the next step of whisking in Cool Whip would take care of that, since my Cool Whip was about 2/3 frozen due to the fact that I forgot to take it out of the freezer. 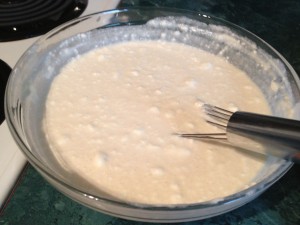 Yes, that vile, chunky-looking mess is the filling of a pie.

Actually, it’s the filling of a pie plus two little ramekins of vile, chunky-looking pie filling because it wouldn’t all fit in my store-bought pie crust and I just didn’t think of dumping it in the trash. So now I have two little crustless sample sizes in my refrigerator, too. 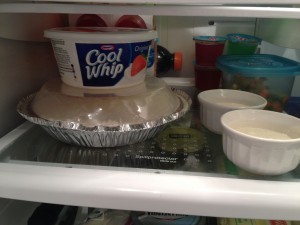 The End of the World party drew nigh, and lo, the pie was not set. But I declared it “set enough,” and decided to put the topping on right before we got in the car to go so that I wouldn’t have to do it at the party. 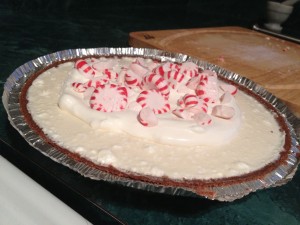 Well-pleased with my trickery, we set off into the dark night.

Now, the directions did say, “serve immediately,” but when have I ever really followed directions in the past? So I let that thing sit in the refrigerator at the party while we all got drunk and made tinfoil hats. Not kidding. 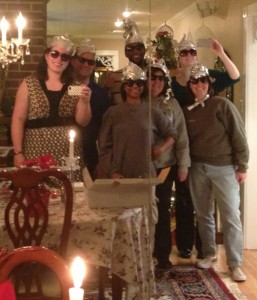 (We took our picture in the dining room mirror because we were drunk and creative by then.)

Eventually, we got around to pie eating, and I took it out of the fridge and found out why “serve immediately” was probably appropriate for this pie. 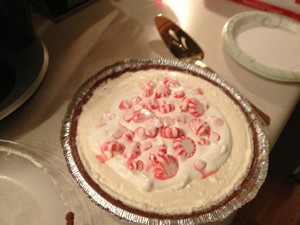 Apparently, peppermints melt when you stick them in boogery-gelatin-mixture.

But, folks at the party seemed to like it. One person went back for seconds. Also, party-goer Liz coined the term “fuck sprinkles.” (She says I “sprinkle” fucks throughout my blog, so they are now fuck sprinkles. You can all thank her for the new terminology.) And then a different party-goer on her way out said, “And now I have met Sonja, and ate her pie.” And everyone immediately made pie-eating jokes.

And the world did not end. But other than that, it was a great party. And an ok-ish pie. 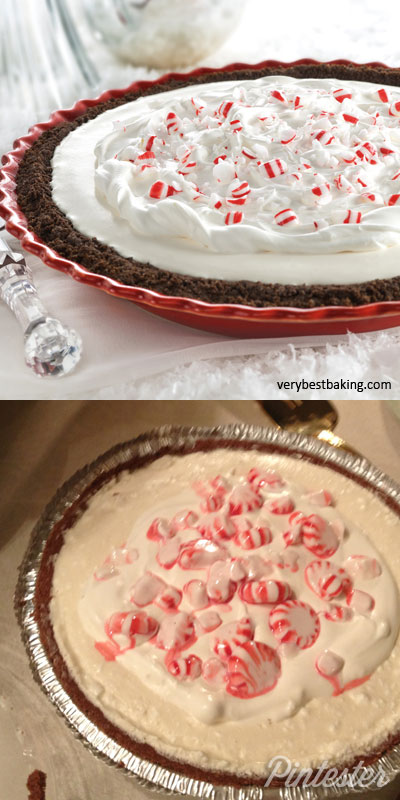