I know I’ve been doing a lot of recipes lately, guys, and I feel a little bad about that, sort of. On the other hand, food is totally popular on Pinterest and, if I’m being honest, totally popular at my house, too. I like to eat, dudes. But stay tuned for a non-recipe pin test on Monday.

I decided to test Italian crockpot chicken this time. Why? Well, I’ll tell you. After I show you the pin: 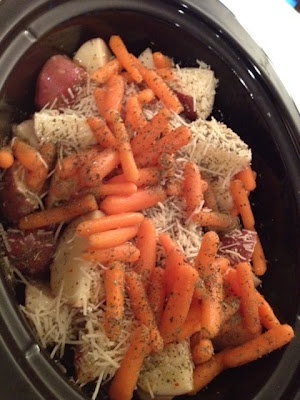 So, I’ve found myself lately with a mandate that I cook dinner. Normally, I would wave my little feminist flag and say, “No way, asshat,” and then not cook for weeks just out of spite. But I feel like I should cook now because (tada) I’m no longer officially employed. Yup, I got downsized out of my day job and can now officially claim that I am a blogger, since I am not otherwise gainfully employed.

Anyway, in trying to assuage my guilt about not being a salaried member of the household, I volunteered to cook and clean. Plus it would give me fodder to test. Bwahahaha. Look out.

I like crockpot recipes, generally. Because I am a lazyass. Yes, even when I am home all day, I can find many better things to do than cook. Like nap. Or read. Or pluck my eyebrows. Or make scary faces in the mirror until I convince myself that there is a demon inside me and I need to go hide under the bed for a while. 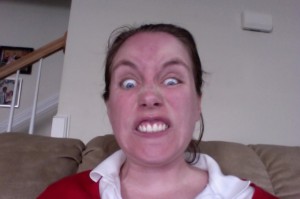 Anyway, this one was pretty easy. You just throw everything in the crockpot. 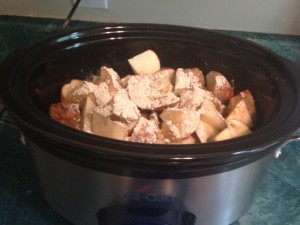 Please note that I even used actual potatoes, thank you very much. I didn’t figure a rice substitution would really work on this one.

I let it cook all day and it smelled really good and I was excited about it. But then I opened the lid and dished it up and I was not excited anymore. It wasn’t exactly terrible, but it wasn’t good. The dressing sort of separated into yuck and oil, and it was a little overwhelmingly… well, just kind of assy. Also, the carrots didn’t cook quite enough, or something. I don’t know. I’m not a freakin’ chemist so I don’t understand these things.

Also, I couldn’t really dish the stuff out separately, so we had sort of a chicken-Italian-dressing-potato-carrot stew. Probably if they’d called it that, I wouldn’t have tried it.