Do you guys know why I don’t do too many crafts on this blog? I mean honest-to-goodness, make-something-cute-out-of-something-else crafts? Because when I do, I end up with ugly shit that I have to throw away. And after the effort of crafting a thing, even if it turns out like the aforementioned shit, it’s hard to throw it away. But I love you, and I decided that this had to be tested anyway, despite my fear of crafts. 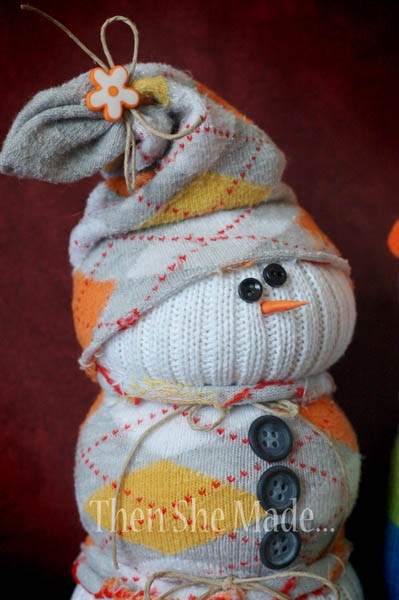 Image from Then She Made

For the average person, you should have all the stuff you need for this craft already around: Basically, you just need a tube sock and a sock with a pattern on it, and some buttons and stuff for the decorations.

I am possibly the only person in North America who does not have a white tube sock in the whole house.

But I refused to let that stop me. 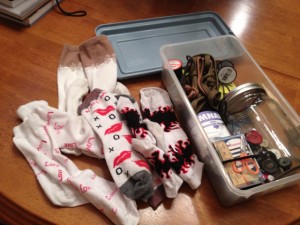 I decided we were going to have a love snowman, since the closest thing to white tube socks I had were a pair of threadbare trouser socks with “love” written on them. (No, I don’t know either.)

And thus began the creation of Calvin the Love Snowman. 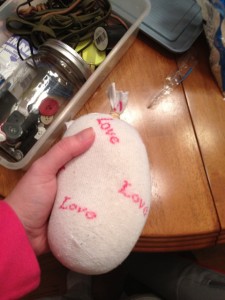 And then he became Calvin the Flaming Love Snowman. 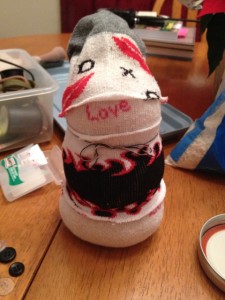 (Incidentally, when people ask me what the weirdest thing in my sock drawer is, I can honestly answer “my socks,” because these are just the ones I was willing to part with. There are more. Oh yes, there are more.)

Fully assembled and ready for decor, I realized I needed a method to attach Calvin’s buttons and facial features. I could have used my hot glue gun. I do, in fact, possess one. But who wants to wait for glue to heat up etc., etc. when you have Krazy Glue readily available?

I went to fetch it from where I’d stashed it on top of my desk hutch in the office and I swear to god it was covered in Indiana Jones quality cobwebs. I have never seen cobwebs in a house that massive, sticky, dusty, and hideous. Some mutant spider, I’m pretty sure, has been feeding off my Krazy Glue and shitting out monstrous mutant spider webs. Yech. (No pictures because I was freaking the hell right out at that point.)

If there’s one thing you guys should expect by now, it’s that if I am using Krazy Glue, something is going to get glued to something else that it wasn’t supposed to get glued to. In this case, I accidentally glued a button to my thumb. After prying it painfully free, I was left with a glue callous of impressive size. 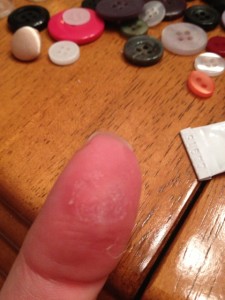 And also, there will forever be evidence of my left thumbprint on Calvin’s bottom button. 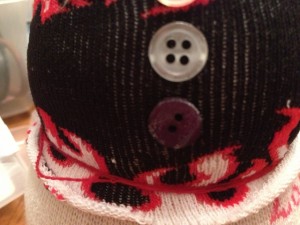 Anyway, after long minutes of highly skilled crafting, I came away with a wacky snowman of love that no person in their right fucking mind would ever display anywhere, ever.