I figured it would happen someday. I’ve had several close calls. Sometimes I stick my phone in the back pocket of my jeans and I forget about it until I drop trou, usually with my jeans pocket aimed directly toward the toilet. All past occurrences have ended with the phone dropping harmlessly to the bathroom floor. But last week, the unthinkable…

I was visiting my parents and had stuck my phone in my pocket hurriedly, probably to free up my hands to hold one of my two nieces, who are 4 months old and 2-and-a-half years old and both need to be held a lot and somehow manage to take up the arms of four adults pretty much all the time. At some point, I extricated myself from adorable baby girls for a quick pee break, but before I could even sit down, I heard the “ploop” that made my heart sink along with my phone. Fuuuuuuuuck.

I don’t have a picture to show you because I turned around and pulled that thing out without even blinking or thinking about how many poops had been in the toilet since last it was cleaned (probably lots less than it would have been in my toilet, because my mom is a better housekeeper than I am).

I dried it off the best I could and shook out the water from the headphone jack and the power port.

Later, my 2-and-a-half-year-old niece saw I was distressed and took the cleaned and dry-ish phone from me, noodled around with it, and then said, “It’s fixed, don’t worry,” and handed it back. She is cute, but I did not believe her.

Everything still appeared to work, but I was worried that the water would corrode things if I just left it be, so I brought it home and stuck it in a bag of rice because Pinterest told me to. 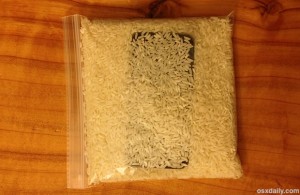 The hardest part of the process was being without my phone for 24 hours, which was as long as I could stand to leave it in the rice bag without going after it. Candy Crush does not play itself, people.

I had just enough rice left in my cabinet to get this done: 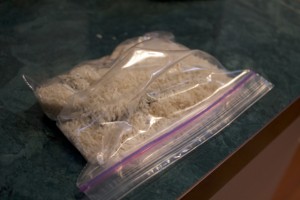 When I couldn’t stand it anymore, I took my phone out and powered it on, and it worked! Hooray! A happy ending for all involved.

So, here are my tips for if your phone ever goes for a swim:

1. Don’t think, just grab. You can always wash your hands later. Shit comes off with soap, but iPhones are expensive as fuck.

2. Find a cute little girl to bestow her magical fixing powers upon your device.

3. Be sure to have just enough rice left in your pantry to do this.

4. Distract yourself from the lure of Candy Crush with many Netflix episodes of Ally McBeal.

Hope you have a similar outcome if your phone ever goes swimming in the toilet. 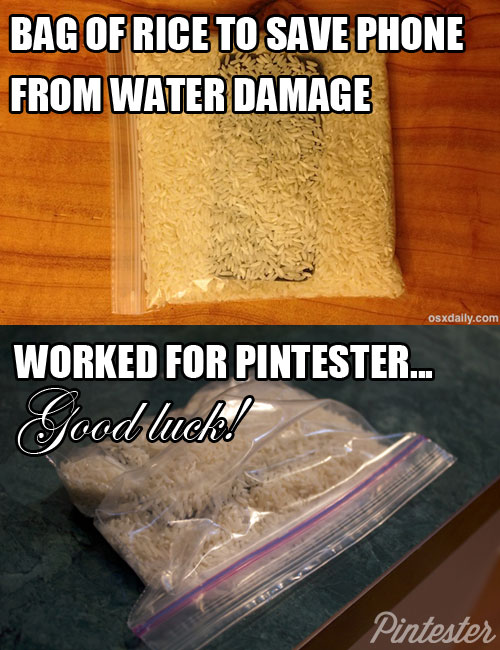 Article Name
Bag of Rice Trick for Submerged iPhone
Description
The unthinkable happens, and the Pintester drops her phone. In the toilet. Can she save it with the bag of rice trick?
Author
Sonja Foust
« Previous PostCandy Corn Cocktail and Candy Corn on the Cob Next Post »Pinteste Round-up: Cha Cha Cha