Apartment Therapy is one of those blogs I read because I hate myself. No, really. I know that when I go read it, I’m going to feel horribly inadequate about my bigger-than-an-apartment house and the fact that all those cute little Manhattan closets-cum-apartments are actually way cuter than my sprawling suburban 2-story. I do not have raw industrial walls, nor do I have any multi-functional spaces. Hell, I have three full bathrooms, people. I could poop in a different toilet for three days in a row and never leave my house. My house is not a tiny little nest where I can decorate every surface because there are only 5 square feet of actual surface to decorate.

Buuuut, now and then I see something on Apartment Therapy that I think I might be able to handle. Like a clementine candle.

I don’t know why, but the idea of making a candle out of a cute, sweet little clementine is kind of fascinating. I’m not the only one who thinks so. This project has been repinned like a hojillion times.

Unfortunately, it is not clementine season where I live. It is navel orange season. They’re both orange citrus fruits, though, so I gave it a go.

I managed to get the peels apart without much trouble. 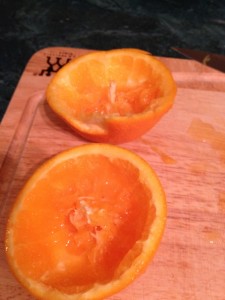 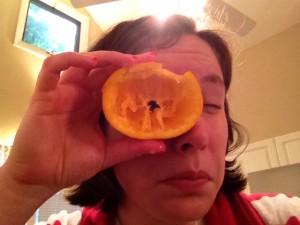 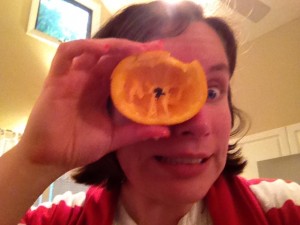 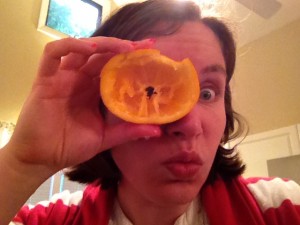 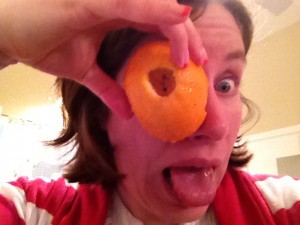 You’re supposed to fill up the wick end with some kind of vegetable oil or olive oil or something, but, um, I didn’t have any. I did have some oil, though. 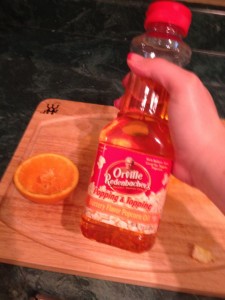 Next step? Fire. Well, not immediate next step. I took a 2-minute long video of me trying to light the damn thing. I started rolling because I was pretty sure the whole thing would ignite the minute the flame touched the popcorn oil, but not so. The 2-minute long video features me trying to light the oil-filled orange over and over and over, all while battling a monster case of the hiccups. (I was a little drunk.) Which is why I’m not posting the video. Really, the only highlights are when the camera shakes because I hiccup while holding a flaming butane lighter against a full cup of popcorn oil. And nothing happens. It’s bizzaro land. I should have 3rd degree burns and no eyebrows right now. 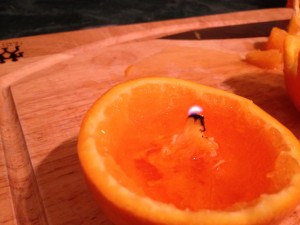 It took me another 16 or 20 tries to get a flame that lasted longer than 3 seconds, but it eventually took. And I had a clementine, er, well, navel orange candle. Just like on Apartment Therapy. Take that, snotty cute apartment dwellers.

I’m not really sure why I wanted one in the first place, though. It was a lot of work and it kind of smelled bad. Turns out that when you burn an orange, it doesn’t smell like orange. It smells like burning. Hm. Who knew? 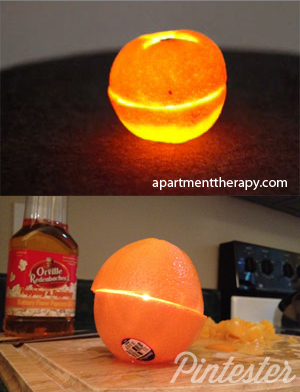