I was in New York a few weeks ago, and while I was there, I went to this fancy-pants speakeasy where they had old-fashioned snooty cocktails called things like The Old Fashioned. (Right?) I wanted to make fun of the douche-baggery, but honestly, they were the best freaking cocktails I’ve ever had.

So I returned to my home state eager to try my hand at some of my own cocktail concoctions. The Paloma looked promising on Pinterest, mostly because I had an approximation of all of the ingredients.

Well, approximation. The blog post waxes poetic about reposado tequila that is sucked from the agave leaves by the mouths of virgins and aged in barrels made from Jesus’ cross for exactly 17 years and 2 days.

I didn’t have any of that shit. I used Jose Cuervo, mayn.

I also did not have any fresh grapefruits or limes. (Big surprise there.) So Ocean Spray came to my rescue. 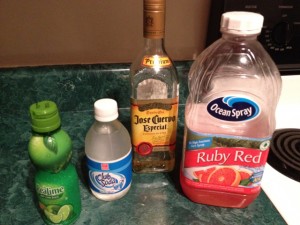 It’s surprisingly difficult to find out how much grapefruit juice is in half a grapefruit. When I Googled it, the response was largely, “OMG, you shitstain! I cannot believe you are too lazy to juice a damn grapefruit! You do not deserve to know the answer! You are dead to me. Dead.” So I guessed. 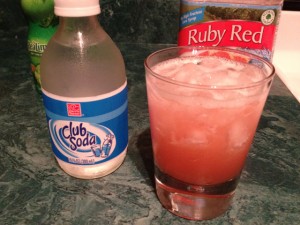 … a problem easily solved by drankin’ somma dat shit. So I did and then topped it off with the club soda. 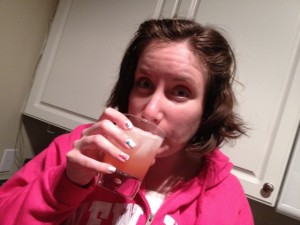 I have to tell you, it wasn’t that bad. I mean, I’m sure the Holy Tequila would have made it better and stuff, but you can’t really go wrong with juice and tequila. (I might embroider that on a pillow.)