I was going to make a cocktail with cucumbers in it, because how gross would that be, but when I went looking in the fridge for my cucumbers, they were liquified and moldy. I have a pretty high food squick-factor. I mean, I eat the wimpy kind of sushi in the rice rolls, and the smell of pâté doesn’t necessarily put me off my French fries. But these cucumbers were pretty gross. I still get that weird unpleasant spinal shiver-gag when I think about it too hard. So that cocktail will have to wait, because even I will not eat liquified moldy cucumbers.

Instead, I crowd-sourced cocktail suggestions from the Pintestes (I’m trying out a new fan club name– you like?) on Facebook and Twitter. You all stepped up with some truly excellent/horrifying cocktail suggestions, and I will get to quite a few of them eventually, but the first one I decided to tackle was the cake batter cocktail. Partly this is because I had an approximation of the liquors required on hand and I was too lazy to get in the car and drive to the liquor store. Partly it is also because I got two different suggestions with two different instructional links for the same cocktail. 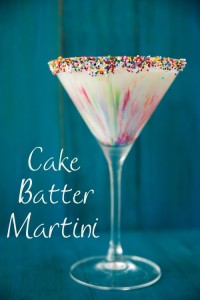 From The Novice Chef 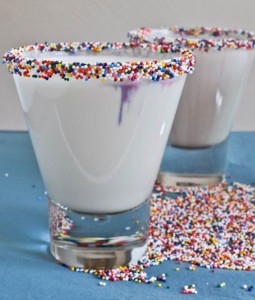 From How Sweet it Is 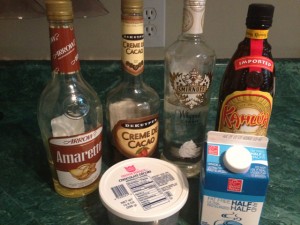 You’ll note that I do not have cake batter vodka pictured here. Because no one fucking buys cake batter vodka. I’m not even sure if it’s a real thing, and if it is, it probably shouldn’t be. I do, however, have Smirnoff Whipped Cream Vodka. But that’s totally different. You can make creamsicle drinks out of it, and it’s awesome. Um, yes. It’s so much more sophisticated than cake batter vodka. Also, I didn’t have white chocolate liquer. Kahlua is close, though, right? Oh, and, I used fat free Half n’ Half instead of heavy cream. What? Come at me, bitch.

You guys, I even had sprinkles. Ok, they’re brown sprinkles, not rainbow sprinkles, but this is me we’re talking about here, so let’s not be too picky, a’right? 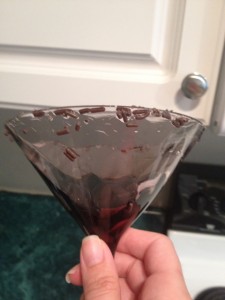 I can’t remember exactly what proportions of everything I threw in my martini shaker, but it was a close approximation of the linked recipes. I’m no cowboy. I follow directions as closely as I can, given the materials at hand… sometimes. 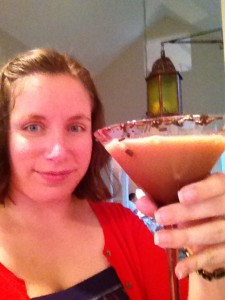 Here’s to you, Pintestes! 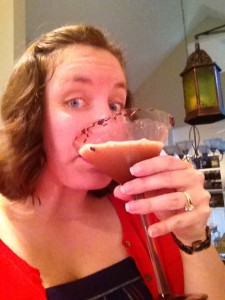 The problem with martinis that taste really good is that I then end up drinking the whole thing, and after a fairly dry week (in the sense that I didn’t drink much, guys, for real), it hit me a little hard. I vaguely recall singing songs from The Little Mermaid to The Bachelorette and tweeting, “Holy shit. I am drunk. I blame @Pinterest.”

Also, I played with the sprinkles a little. 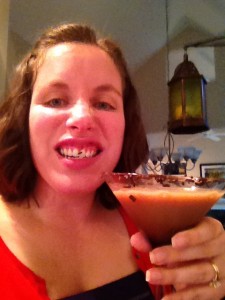 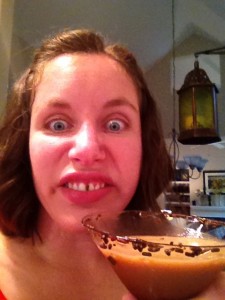 This one is my tribute to YDAD. (Seriously, that girl is a trip, and the puns– oh God– the puns.)

So, ahem, yes, um I can’t give you guys a real verdict because I cocked this one up. But my version was kind of awesome and got me drunk, so, mission: accomplished.