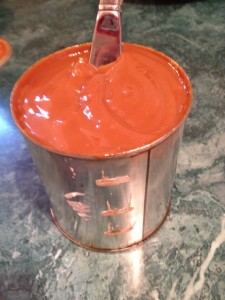 And then I was faced with the problem of what to do with that dulce de leche. That problem dovetailed nicely into the unrelated (I thought) problem of a fruit fly in my kitchen going after a pile of brown bananas. Enter the banana pie. 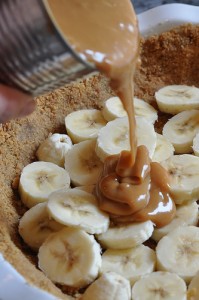 As an added bonus, it’s Pie Week on NPR, which is the radio station that fades into my unconsciousness in the morning until I hear some story about Greek economics or our healthcare system and wake up enough to turn that shit off. (7 a.m. is too early to be pissed off about the state of the world. If it’s Car Talk, I leave it on.)

I skipped all that homemade crust and frosting crap, though. Why make when you can buy? 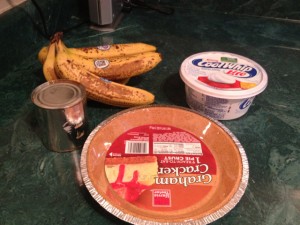 Also, I’m pretty sure this is healthy, because there’s fruit in it and I used Lite Cool Whip… 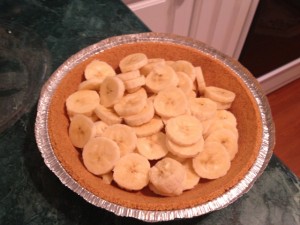 Everybody in the pool… the brown, disgusting pool. 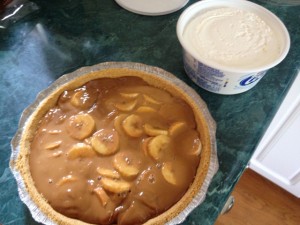 Then I topped it with Cool Whip and the few chocolate chips left in the bag after I got hungry the other night while watching Ally McBeal and ate most of the bag myself. 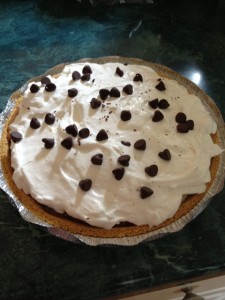 Looks good, right? Yeah, I thought it looked good enough to bring over to someone else’s house, where there was a pool party going on with some friends and family.

My first indication that this was not a good plan was the layer of viscous vomit-like substance in the bottom of the pan once the first slice had been dished. I sorta shoved the pan behind something to hide it and made people eat the slices anyway. 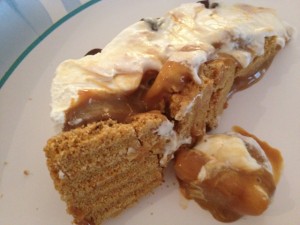 The general consensus was “meh.” It was really banana-y, and it probably didn’t help that I’m pretty sure the dulce de leche was burned. Also, I had earlier that day transported it in a car, with a stop at the grocery store on the way, and it was like 115 degrees, I shit you not. So it was a little melty when it arrived.

I thought the whole thing had fizzled out rather nicely with no one the wiser about the vomit pie substance. But when I got home, I had an email in my inbox with a picture of the vomit pie from one of the taste-testers, and the subject line was simply, “It turned to vomit.” (Honestly, I was a little scared to open it, and was relieved when the picture was really of the pie.)

Oops. Guess I should have remembered to take the pie out of its hiding place and put it back in the refrigerator, huh?