Man-pleasing chicken is just for men and features a giant hunk of thigh for a hardy, masculine bite. The sauce is saucier and tangier for a man’s indelicate palate, but still doesn’t range too far outside the meat and potatoes ideal. Baking is done at the highest temperature setting you can reasonably put your oven on, because men don’t want their wives to fuck around in the kitchen with that “low and slow” bullshit.

It’s kind of like the man-chicken version of the woman-pen. 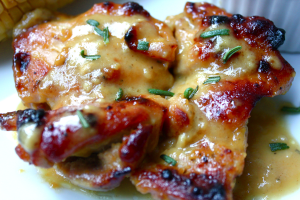 Image from Witty in the City

AT LAST! Chicken for my burly man taste-buds that I can eat without fear that my testicles will retract into my abdomen from eating lady-food.

Holy. Fucking. Shit. For years I’ve been eating woman-chicken without knowing it. I didn’t even realize that my gender required a special kind of chicken, or COCK, if you will. This recipe has shown me the error of my ways. Now if only I could find recipes for man-pleasing petit fours, cucumber sandwiches, and appletinis, my manliness would be complete.

All my life I’ve relied on well-done steaks from the grill (the only thing a man should cook, ever). I had despaired of ever being able to pass a normal stool again. This chicken gives me hope not only for poultry, but for diary and vegetables as well!

With those ringing endorsements, I had to try this chicken. To think that for years I’d been denying my husband man-food and not even realizing it!

I set out to follow the instructions from the recipe exactly. I even procured rice vinegar, although there’s only a tablespoon of it in the sauce and I have no damn clue what makes it different from any other sort of vinegar. 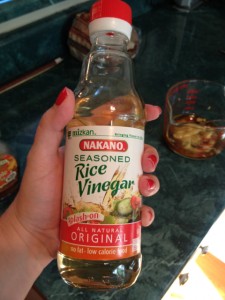 I used a meat thermometer, guys, and despite the fact that I know that chicken is not done until 180 degrees, I only cooked it to 165 degrees because that’s what the recipe said to do.

But then I wasn’t willing to die a horrible, disgusting death of food poisoning, even for this blog, so I put that shit back in the oven.

I am sure that this little slip-up of mine is why my husband did not like this chicken. After all, it is the woman’s job to please the man with her chicken-handling technique. The fact that this recipe has mustard and some men don’t like mustard is absolutely no excuse.

Lest you worry for our marriage, though, I think we’ll be ok. My apology (“Oh my, I am so sorry you don’t like the chicken, dearest! I’m just so silly sometimes and I need a man like you around to read recipes for me and grill things. Let’s have hotdogs instead.”**) seems to have worked.

I know it doesn’t matter, since I’m only a woman, but I kind of liked the chicken actually. The sauce was pretty good and the chicken was still nice and tender, even after I scorched it to 180 degrees. 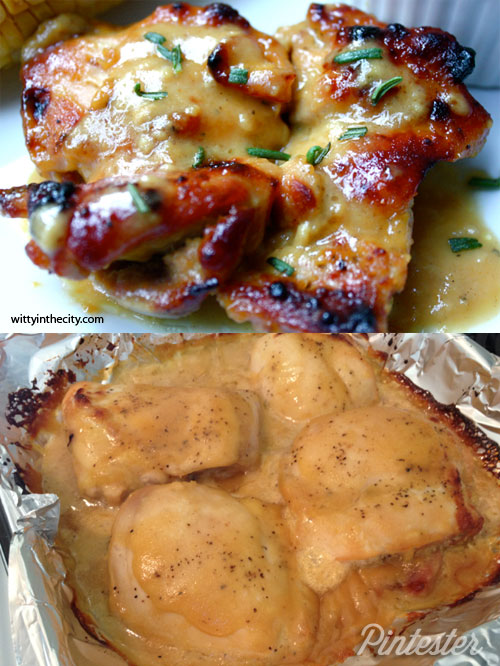 *These are not real reviews. I totally made that shit up.

**There was no real apology. I love my husband, but if he doesn’t like what I make, he eats it anyway and is fucking happy about it, or he makes his own damn dinner. He usually opts for the former and did in this case as well.