I sort of try to appeal to the guys now and then. I did try the zip-tie escape thing, after all. And the man-pleasing chicken. But today’s post is definitely for the ladies. You are 80% of my readership, so I don’t feel bad about that.

Specifically, it’s for the ladies like me, who love a good underwire bra but fucking hate that the underwire starts poking out way before the bra gets worn out enough to actually throw away. (I mean, jeez! These things are like $50, people.) 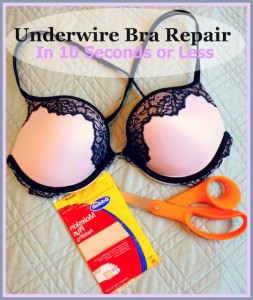 I know, guys. If I hand-washed my brassieres, this wouldn’t happen to me. 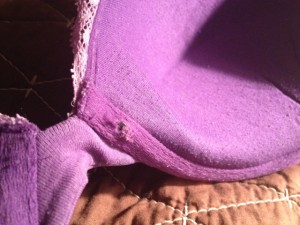 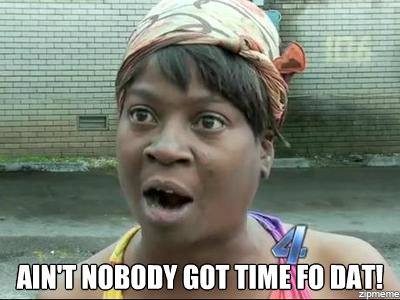 So, whatever haters. If you want to spend all your time hand-washing your flopper-stopper, be my guest. I’m gonna stick some adhesive something on there and expect miracles. 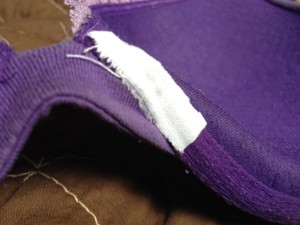 I will admit to you guys that this is not moleskin. I didn’t have any moleskin on hand, since I don’t regularly do infantry humps (which are less fun than they sound, believe me– take that as you will).

I did have some athletic tape. I know, I know, it’s all a lie. Because I’m not athletic. But I bought it a few months ago because I broke my foot, except before I actually knew I broke my foot, I was taping it and dancing on it for a show I was in, because I am a badass. So, yes, not athletic, but danced-on-a-broken-foot has to count for something.

You would think athletic tape would perform fairly similarly to moleskin, at least when used on a bra. You would be right in the fact that I got a day or two of relief because it stayed on while I was wearing it.

Not so much in the wash, though.

So, if you don’t mind re-taping your double-barreled slingshot after every non-hand-wash, use athletic tape. Otherwise, you should probably buy moleskin, learn to sew, or just suck it up and buy a new bra.

Are you still thinking about infantry humps? Grow up.