Martha Stewart and I have a little bit of a rocky relationship. You might call me the anti-Martha, but it’s not because I try to be the anti-Martha. It’s just that where she turns everything she touches into a good thing, I turn everything I touch into shit. (I’ve been known to refer to this particular talent of mine as “the Midass touch.” Get it? Get it?… Nevermind.)

Anyway, the last time I tried one of her cocktails, things didn’t go well. But you all know me by now and you know that I’m a little bit of a glutton for punishment, especially where alcohol is concerned. Plus, this one is pink. 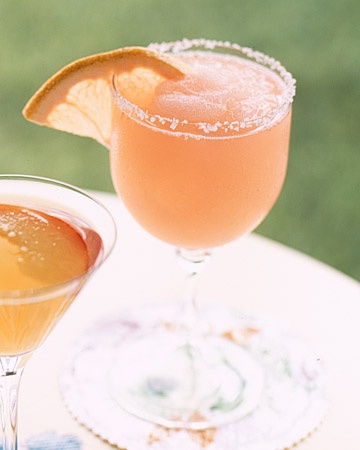 The recipe has some pretty typical Martha Stewart instructions regarding fresh ingredients and blah, blah, blah. Fresh ingredients at my house are usually wine and peanut butter. Everything else is questionable. So there’s nothing fresh about the version I made. 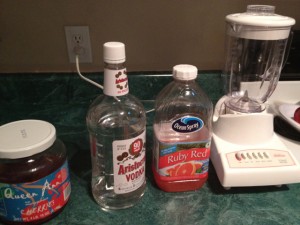 I didn’t have a grapefruit slice with which to wet the rim of my glass. (Surprise. Shock. I know.) I used the next best thing. 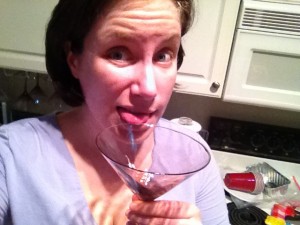 Also, who has coarse salt just sitting around? I had popcorn seasoning, so that’s what I used. Hey, you gotta adapt or you won’t survive. Or at least you won’t ever drink a cocktail, because I can never make them exactly as described. They always call for something weird like a single tear from a red-haired three-year-old. Dude. Who has that?

Along those same lines, I didn’t have any grenadine either, so I used maraschino cherry juice.

I had to get out my blender for this one. As you’ll recall, it’s my circa 1999 blender. It ain’t no Vitamix. 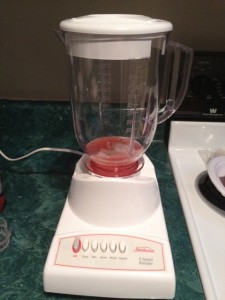 I knew it was going to be bad about half a cup of ice into it when the blender was still making noise, but none of the liquid was actually moving. In case you are unfamiliar with blender technology, that is not a good thing.

I called it quits and poured it into a glass. There were large chunks of ice remaining, so drinking it was a virtual impossibility. I did try to drink it, though, and I’ll have you know that popcorn seasoning is an unacceptable substitute for coarse salt. Lesson learned.

I forged ahead with a spoon. 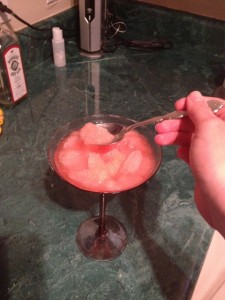 It wasn’t really good, and it was downright abysmal with the salt. Also, there are two tablespoons of liquor in this whole thing, so even though I choked some down, I didn’t even get a buzz, unless you count the wicked brain freeze. 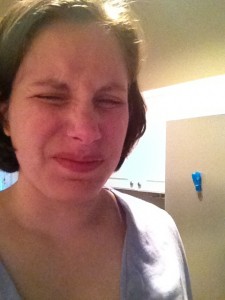 Maybe if you’re more like Martha Stewart than I am, you can pull this off. But you might be an anti-Martha if yours turns out like mine.

« Previous PostStrawberries & Cream Mug Cake Next Post »How to Pack