Since I’m on an apple kick, I thought I’d do another apple post for you guys today. This one got a whole bunch of repins when I pinned it, probably because baked apple cinnamon chips sound pretty damn delicious: 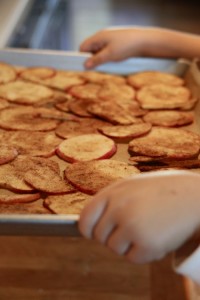 Image from The Silver Pen

I opted for golden delicious apples this time because they didn’t come from the grocery store, so I was fairly certain I wouldn’t find any surprises like the wormhole under the sticker. (I went to an apple farm to buy these. I’m classy like that.) 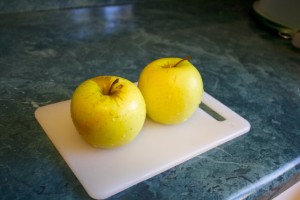 All you need for this recipe are two apples and some cinnamon and nutmeg. You can add a little sugar too, but golden delicious apples are pretty sweet already so I figured, what the hell, and decided to live on the wild side and skip the sugar. Hey, that also makes these things paleo, if you’re interested in that sort of shit. 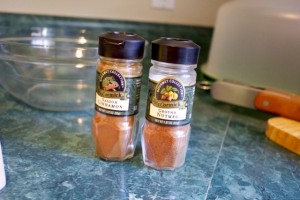 All you have to do is slice the apples and cut out the core. If you’re like me, you nearly chop off your thumb a few times in the process. 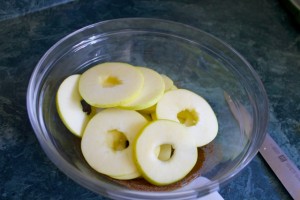 The original post suggests using a cookie cutter to take out the core, but all I had was my penis cookie cutter and it was too big. (That’s what she said.)

I really didn’t think there would be enough cinnamon/nutmeg mixture to adequately coat all the apple slices because it looked like a lot of slices and not much dust, but turns out there was plenty. 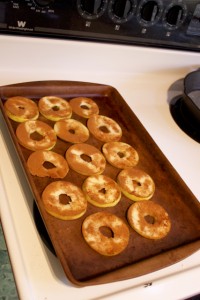 Full disclosure: I was going to do this test yesterday, but by the time I got home and read the directions, and then they said you have to bake these for TWO FUCKING HOURS, I decided that I did not have time. So I started these first thing this morning because I knew it was going to take at least two hours to bake these, and ain’t nobody got time for that.

I did, indeed, check these at an hour and a half and also at two hours, and then I forgot about them so they ended up baking for almost three hours, and they still didn’t seem all that crispy to me… 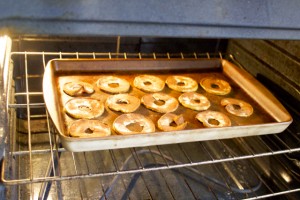 But I was tired of waiting for them to be done, so I took them out and let them cool.

So, bad things about these:

1. It’s kind of a pain in the ass to cut the cores out of slices of apples, and you may lose a thumb if you’re a spaz.
2. They take a really long time to bake.
3. They never achieve a chip-like crispiness. Some of them were pretty chewy, in fact.

But, good  things about these:

1. It’s just apples and spices, so you can feel all superior for eating something “natural” (as long as you don’t think about all the pesticides the apples had sprayed on them).
2. The prep work doesn’t take long, and at least you can go do something else while they bake for THREE FUCKING HOURS.
3. Even though they’re not all that crisp, they’re a little crunchy and they taste pretty good. Mine turned out extra dusty, but you know, you could fix that by not putting as much shit on them.
4. They make the house smell awesome while you’re cooking them. This one is probably the best part of the deal because it really did smell damn good. And I guess if you’re going to be trapped in your house for THREE FUCKING HOURS waiting for apple slices to slowly dehydrate in your oven, at least they should smell good.

Article Name
Baked Apple Cinnamon Chips
Description
This recipe takes three hours to do, but the results aren't terrible... as long as you don't think about the three hours of your life you'll never get back.
Author
Sonja Foust
« Previous PostApple Candle Next Post »Stay