Sometimes my ineptitude is fortuitous. Allow me to explain. Today, I decided to try the cinnamon roll waffles I’ve seen on Pinterest. 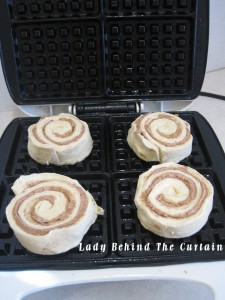 Image from Lady Behind the Curtain

To be honest, I had visions of ruining my waffle iron and/or burning down my kitchen… because that’s how cooking adventures tend to go at my house. The thing is, though, now that I’m the Pintester, it doesn’t bother me as much. Burning down my kitchen would just be the ultimate blog post, right? I mean, it would probably go viral or something, and I’d earn enough money to rebuild my kitchen. And, bonus, I could get rid of my piece-of-shit microwave that will not die. Win-win, as I see it.

So, emboldened by the hope of a remodeled kitchen, I hauled out my waffle iron and plugged it in. 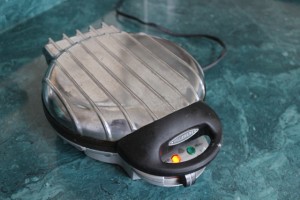 While it was heating up, I puttered around in the kitchen, unloading the dishwasher and destroying evidence of fast food consumption. (The calories don’t count if no one ever finds out about them, right?)

Only when I opened the waffle iron to put on the cinnamon rolls did I realize that my waffle iron is a mini waffle iron– much, much smaller than the one pictured in the source blog post. Hell. 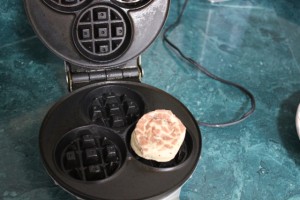 Also, my cinnamon rolls were strangely much less beautiful than the be-swirled ones on the source post, but I was really much more concerned about the size of my waffle iron. Sometimes size does matter. It’s just a fact of life. I briefly debated trying to put only two cinnamon rolls on the waffle iron and somehow distributing them among the tiny waffle shaped holes, but ultimately I had to think fast before it cooled off, so I just stuck one cinnamon roll in each hole, squished them down, and prayed. 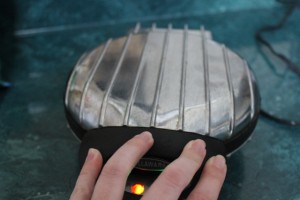 I should also mention that I did remember to spray the waffle iron with cooking spray. It’s a non-stick waffle iron, but it hasn’t actually been non-stick in many years. So I spray that sucker even when I’m making regular waffles.

The original blog post made a big point of saying you should be sure to check your cinnamon rolls frequently and don’t rely on the beeping, but I was afraid to look. So I just waited. I let it all cook and steam until the waffle iron beeped to tell me it was done. 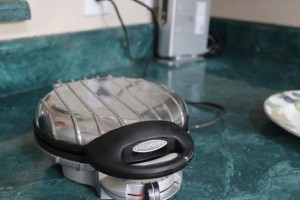 When I opened the lid, this happened: 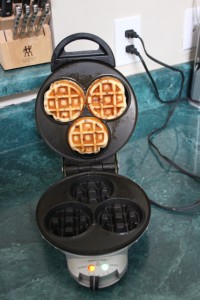 I was momentarily afraid that I’d forgotten to spray the top part and they would be stuck forever and ever amen, but I managed to get the cinnamon rolls off easily with a fork. (I find that a good fork cures many ills.)

Here’s where I began to really wonder why this whole experiment didn’t implode as I sort of expected it to… My waffle iron is tiny. My cinnamon rolls looked weird. My cooking spray skills are fair to middling, at best. So why did it turn out so well?

The reason, ironically, is that I fucked it all up before I even began by choosing the wrong cinnamon rolls.

These are the ones I was supposed to get: 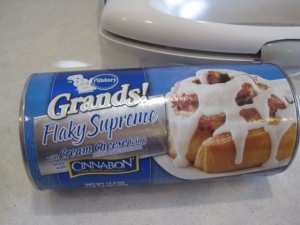 These are the ones I actually got: 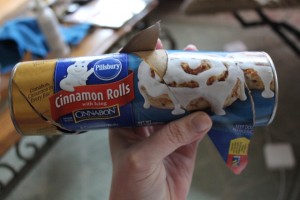 If you have a cavernous waffle iron, you need the extra large cinnamon rolls to fill it up.

P.S. PENIS! I thought I could make it through this entire post without actually using the word “penis,” but I can’t. You should now go back and re-read and replace every instance of “cinnamon roll” with “penis.” The end.