I’m forever looking for an excuse to eat candy and not feel super guilty about it, and guys, before you crucify me for saying these are “healthy,” please note that I am not saying that. I get that they are still candy. But they are probably less bad than, you know, an actual peanut butter cup… maybe. Because, dude, they’re from a paleo website. Come on. 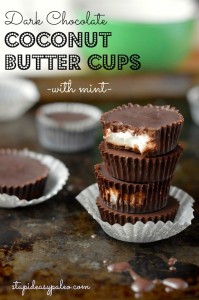 I almost didn’t do this, though, because it involves a food processor and I’m a little bit scared of my food processor. I don’t know. It has sharp things and a motor. Seems like a bad idea. 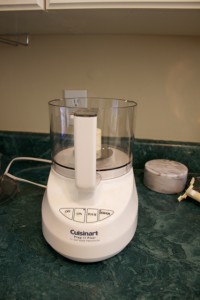 But I bought coconut oil especially for this project, so there was no way I was not going to do it. (Not that I won’t find a use for the coconut oil later because that’s the new, hip thing now so everything on Pinterest uses at least a tablespoon of the stuff– face masks, hair masks, make-up remover, all kinds of recipes… probably home decor, too. I don’t know. Maybe you can use it to polish furniture or some shit.) 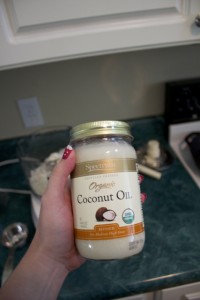 So I threw everything in the food processor… 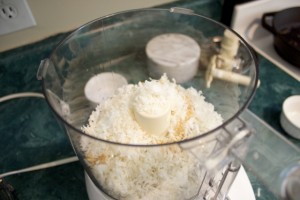 And I processed for long minutes. 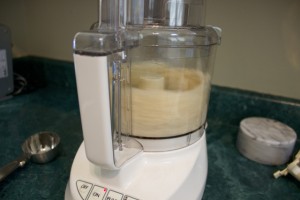 It seemed too grainy, so I added more coconut oil and processed it some more. I think I seriously processed this stuff for like 10 minutes. It was not a small amount of time. But I could not get the texture to resemble butter in any way. 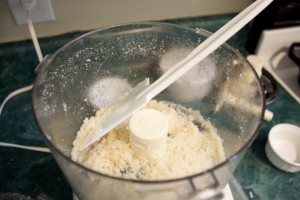 I gave up and rested my hope on the possibility that it would somehow congeal into a more butter-like texture if I just took it out of the food processor and set it aside. (Totally valid, I think. And also, the site is called stupideasypaleo.com and I did not want to admit to being too stupid to do a recipe from a site with “stupid easy” in the title.) On the bright side, it tasted like coconut mint heaven and I could have just sat there all day eating spoonfuls of grainy not-butter.

Here’s the part where I admit that I actually don’t care too much about whether this is really paleo or not, because these are not paleo. 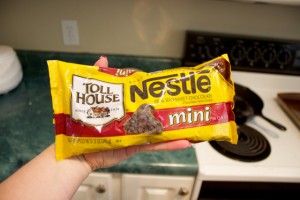 (My husband and I have decided, because we are sanctimonious pricks who think we are better than paleo, that every time we encounter something that is fun, delicious, or awesome, we will sternly remark, “That’s not paleo,” and then giggle to ourselves because we are hilarious.)

But I used them anyway. I did check to make sure it was the right amount of chocolate according to the recipe, just so you know. That will be important later. Ooh, foreshadowing.

The instructions said to form the bottoms of the cups by using your spoon to spread the chocolate up the sides of the paper cups. Uh, yeah. That doesn’t work. By the time I was done with these, I was just plopping chocolate in and praying. 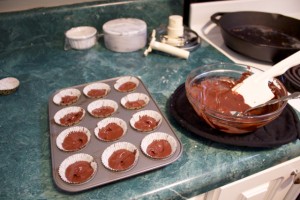 I estimated that I had enough chocolate and grainy not-butter to make 2 pans of mini cups. After letting the chocolate set in the refrigerator for a while, I added the coconut butter and realized I was correct about having enough of that. 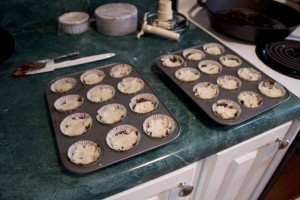 I was, however, massively incorrect about having enough chocolate. 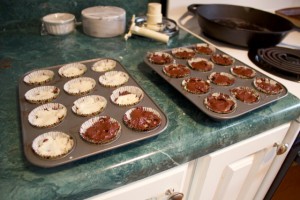 In fact, I barely had enough chocolate to cover up a little more than half of these, and even then, the coverage was not good and pieces of grainy not-butter were poking up out of the not-smooth-at-all chocolate tops.

By this time, I was frustrated with the whole not-butter thing and frustrated about not estimating the chocolate right, and just generally wishing for the project to be over, so I did what any self-respecting sanctimonious prick would do. I completely ruined any hope of eating something paleo by topping the rest with leftover green frosting. 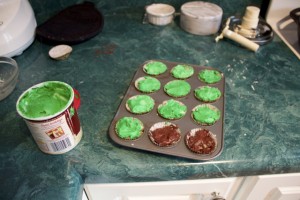 So how did they turn out? Well, they’re all ugly as sin, even the chocolate ones. The chocolate ones don’t taste terrible, although the chocolate is too hard and the not-butter is still grainy. I mean, it’s chocolate and coconut and mint, so what’s not to love? The frosting ones are predictably more disgusting, and have a reservation at the corner of maybe-my-dad-will-eat-them and oops-I-dropped-them-in-the-trash.