I feel like I’m always apologizing for making paleo stuff on this blog, but dudes, I’m reviewing the stuff I make, and I make a lot of paleo stuff. It’s not that I eat paleo stuff all the time, and it’s not that I think everyone should, and I am totally not evangelizing for any one way of eating, but it’s my fucking blog, so deal.

Now that that’s out of the way, let’s talk about paleo coconut chicken, shall we? 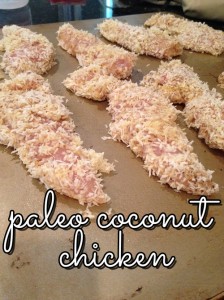 I was looking for an easy recipe to make one night, and this one fit the bill, especially since I still had coconut in my pantry from my failed coconut butter cups.

1. In order to actually make this paleo, you need some sort of non-flour substitute, like almond flour or something. I did not have any, nor did I find any at the grocery store. (This is probably my fault, so don’t get all mad and start telling me I must just not have looked in the right place. I fully own that. But I still couldn’t find it and couldn’t be arsed to hunt down a zitty grocery stockboy to help me find it.)

2. The recipe calls for unsweetened coconut, which is what I thought I had. I didn’t.

In lieu of not making anything for dinner and ordering pizza (again), I decided to just use what I had and hope for the best. So the way I made this is not really paleo. Those of you who were waiting in the wings to tell me how sanctimonious, trendy, and unscientific I am for eating paleo can leave now. 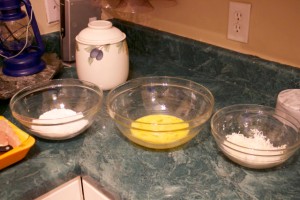 So yep, that’s real flour for the flour step, then eggs for the egg step, then sweetened coconut for the coconut step. At least the meat is paleo. (Well, technically it’s not, because it’s not organic, free-range, liberated, cuddled, grass-fed, hormone-free, superior-in-every-way chicken. It’s just regular, you know, chicken. But whatever.) 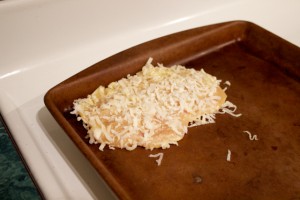 At this point I got a wild notion to make a side dish, and I hunted down the various greens my thoughtful neighbor brought me from the last vestiges of his garden. He didn’t tell me what they were and I didn’t taste them, and I sort of just assumed they were for, you know, salads. So I sautéed them all together. 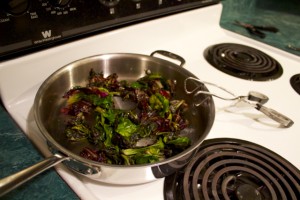 I reasoned that at least if the main dish isn’t quite paleo, we’ll still have some healthy green crap as a side dish.

I even managed to make the sautéed greens ready about the same time as the chicken. That’s some Sally Fuckin’ Homemaker shit right there, you guys. It rarely happens around here.

When plated it looked pleasingly delicious and nutritious. And I gotta tell you, the chicken wasn’t that bad, but I’ll get to that… The greens were awful. Apparently they were not salad greens. I don’t know what the hell kind of greens they were and I don’t know what the hell you would do with these greens because they tasted like bitter, bitter assbutt. Like I cried when I took a bite, it was so bitter.

So, um, maybe that’s part of the reason why the chicken seemed so very, very sweet. I mean, I know it has flour and eggs and sweetened coconut on it, and you could probably make a cookie out of that shit, so it’s gonna be a little sweet, but it tasted like coconut chicken cake next to the assbutt greens.

My advice? Skip the greens (or actually ask your neighbor what they are before you saute them), and don’t sub out the paleo ingredients because you are lazy.