About a year ago I switched from cleaning my bathroom with 409 to cleaning it with vinegar. This tends to work pretty well except for a few unfortunate side effects: 1) My bathroom smells like a Captain D’s for a little while after I clean it. 2) My husband gets pissed when he steals the bottle of 409 that I appropriated for the vinegar and realizes it’s not 409. Oops.

I haven’t switched from using Windex on my mirrors, though– mostly because I still had some left in the bottle and was too lazy to find something else to use. Happily, Pinterest always has a solution. 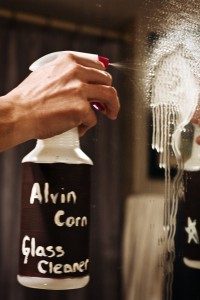 The recipe is a combination of rubbing alcohol, cornstarch, water, and vinegar (my favorite). 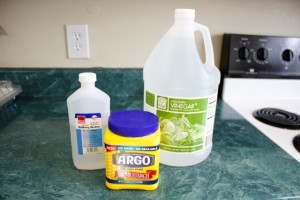 For this one, I appropriated an old Windex bottle, but I’m thinking it won’t really be a problem, since the resulting mixture looks nothing like Windex. But you never know. Colorblindness is an oft-used excuse in my household, for things like why it’s hard to sort laundry into lights and darks and why it’s ok to run red lights. (Oh it was red? My bad. Colorblind.) 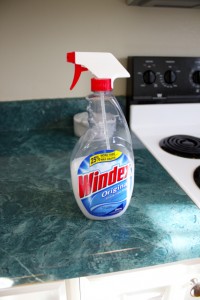 I decided to give it a whirl in the front bathroom, mostly because the back bathroom was too disgusting even to post a “before” picture on the internets. (I have some pride.) The front bathroom was none-too-clean either. It’s hard to tell in the picture, but there are smudges on the mirror, I promise. 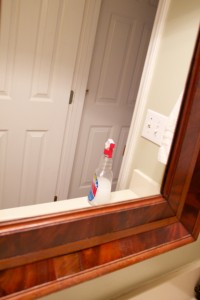 I sprayed with abandon (heh heh) and, I have to tell you, I was not immediately convinced that this would work. Windex somehow gets unstreaky really fast, like there’s this super-powered evaperatory mechanism or something in the chemicals. A mixture of alcohol, cornstarch, vinegar, and water does not have this mechanism, apparently, and leaves things streaky as you are wiping. (Heh heh.)

However, there is a happy ending (heh heh) to this story, for while the streaks do not immediately disappear like they do with Windex, the mirror does still get clean, and the streaks do go away– they just take like a second-and-a-half longer than Windex streaks.

Overall? I’d say this is a winner, mostly because now I don’t have to brave Wal-Mart for more Windex.

Article Name
Alcohol Vinegar Corn Starch Glass Cleaner
Description
Pintester makes her own glass cleaner, which is not the same as Windex, but still works, and also means not having to go to the store, so even if it didn't work too well, she'd probably use it anyways.
Author
Sonja Foust
« Previous PostMad Hatter Cocktail Next Post »Homemade Dog Treats