Fool me once, shame on you. Fool me twice, I must be the Pintester. Because, you see, I’ve actually already tried two different versions of this easy fresh apple cake. 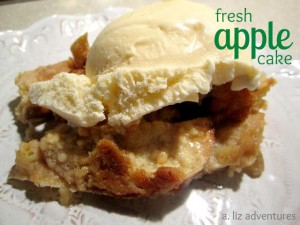 Image from a. liz adventures

Yep, I tried it once in the form of a 2-ingredient apple pie cake. That one tasted pretty good, actually, but involved canned apple pie filling instead of fresh apples. And I also tried it in the form of a cobbler with berries and soda instead of apples and butter, but the idea is very similar. That one didn’t turn out so well– I ended up with a lot of dry powdery parts. (In the cake guys, don’t be weird. My parts are all properly moist and un-powdery, thank you.)

Still, I reasoned that this time things would be better. So I assembled my ingredients. 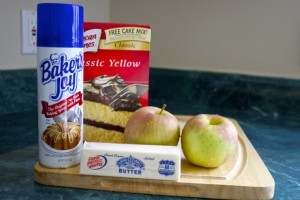 For this one, I decided to use my handy-dandy apple corer/slicer thingie since there was no need to peel the apples. I reasoned it would save me mucho time. But, really, I think I need corer/slicer lessons, because they turned out like this: 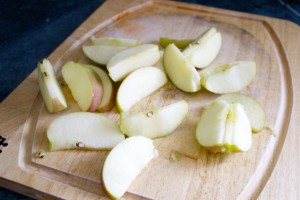 And then I had to pick the damn seeds out by hand anyway so I don’t think it saved me much actual time in the long run. I did manage not to cut any of my digits off, which is kind of a miracle, considering the amount of pressure I had to apply to the thing and the number of swear words flying out of my mouth.

The instructions said to use 2 apples, but when I put my 2 apples in my pan, it looked like this: 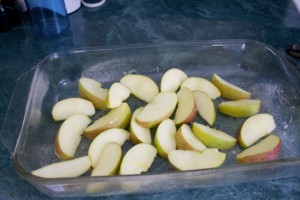 I don’t think I’m being unreasonable at all to think that that is not nearly enough apples, especially when the picture in the original post looks like this: 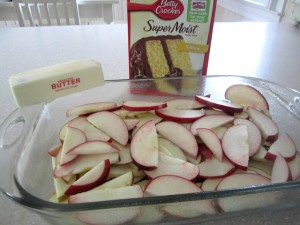 She claims that’s 2 apples, but if it is, her pan is much, muuuuuuch smaller than mine. My pan was cavernous and required more to fill it up. (Hurr hurr.) So I added more. 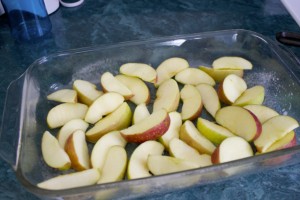 Even still, this looked sparse to me, but I didn’t want to mess up the recipe too much, so I left it like this and added the cake mix. 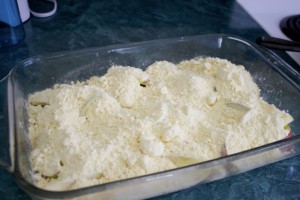 Now, recalling my earlier problem with my berry cobbler wherein the cake mix that was not wet stayed not-wet, I was worried that the butter would not be enough, despite the fact that it’s a whole fuckin’ stick of the stuff. 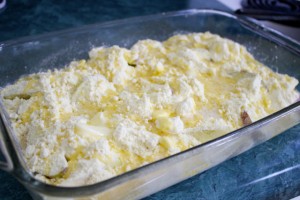 So I briefly considered mixing it all up and/or adding water or something. But the recipe post says:

Usually, I’ve found that the butter and the moisture from the fruit is enough to soak into the dry mix and create a nice cooked crust. If, however, when cooking, you find that some of your cake mix still looks powdery, you can try sprinkling a few tablespoons of water over those areas to ensure thorough cooking.

And, dummy me, I trusted the internets and my own questionable baking skills and figured that since I put extra apples in, I should totally be golden on that whole moisture thing.

Well. I was wrong. 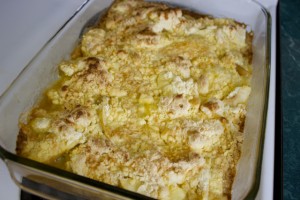 I did try the water sprinkling thing, but it didn’t help. Also, I think the whole thing should have cooked longer and that might have helped, but there were already starting to be burny spots on the top, and I have low tolerance for burny spots, so I took it out of the oven.

Sigh. It tasted about like you’d expect a not-quite cooked apple cake with powdery bits to taste. Was it easy? Uh, yeah. But it seems to me the point is that it should also be, you know, edible. And, at least if you bake like I do, that did not turn out to be the case.

I didn’t even bother putting ice cream on that shit. Would have been a waste of perfectly good ice cream. I did eat a couple helpings of it before I decided the powdery mess, less-than-optimally cooked apples, and random apple seeds I missed made it truly inedible and scraped the rest into the trash.

How bout them apples? 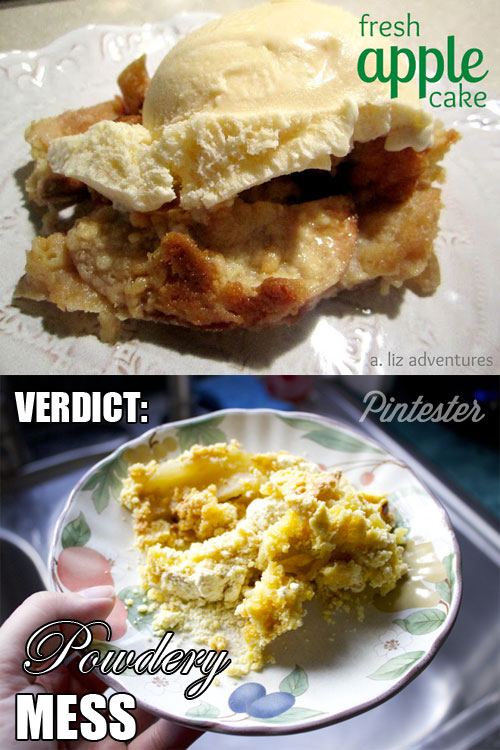