Some days, like Tuesday and Wednesday of this week, it’s really all I can do to film a stupid video about my stupid hair and then rot in front of Dutch dramas on Netflix for the rest of the day. I barely move from the couch, getting up only to stuff my face with Rolos occasionally. I also write some, but you know. Writing involves sitting and moving only the muscles in your fingers. I do not do anything of worth, like cleaning or laundry or cooking or going for a run (ha!) or playing with the dog (like she’d be interested anyway, let’s be honest).

But some days, like today, I am just a freaking badass right down to my little awesome core.

Part of the reason for that is that I did not fail at today’s pin test. When you’re finished making your dying-of-shock noises, come back and I shall tell you the story of badassery.

I decided to try homemade tortillas. 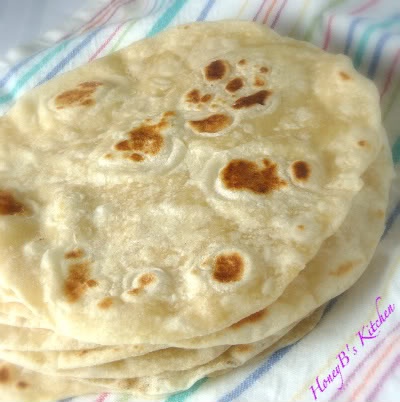 Tortillas have always been on a mental list of things that I would never try to make or do myself, along with sushi, plumbing, and Brazilian waxes. It just seemed like it would be too hard, and plus tortillas from the grocery store are cheap.

But that’s why this blog is awesome. It convinces me to try versions of leg sugaring and DIY self tanner and even making my own scarves… and it usually doesn’t work, but sometimes a happy accident occurs, and I discover a new and wonderful thing.

I’m getting ahead of myself, though. Tortilla-making.

Tortilla-making ingredients are exceptionally easy. I didn’t even have to go to the grocery store for any of this stuff. 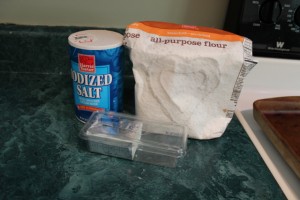 If you’re me, the instructions are less than simple, but apparently still doable. First you combine the shortening and the flour. 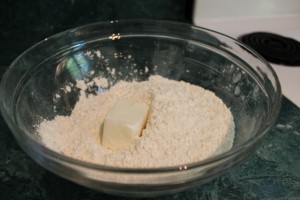 You do this with your fingers until the shortening is “incorporated.” I don’t actually know what that means unless we’re talking entrepreneurship, but I figured just mushing it all around until everything looked approximately the same was good enough. 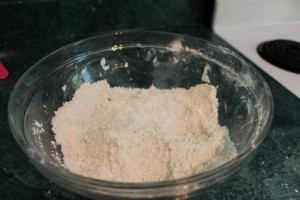 Next step called for dissolving some salt in water and then adding that saltwater until the dough looked right. Uhh, yeah. I have no idea. My first mixing yielded this: 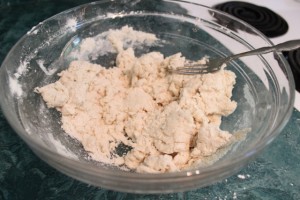 And since there was still dry stuff on the bottom of the bowl, I added the rest of the water, which gave me this: 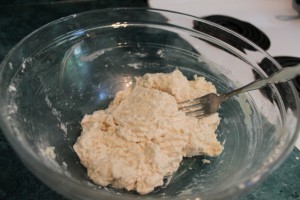 I haven’t a damn clue if that’s actually what it’s supposed to look like, but I went with it.

I actually don’t really know how to knead dough either. 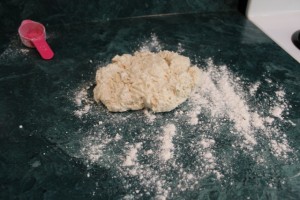 So I pretended like I was massaging something, only then I thought about what would actually react this way if you massaged it, and I concluded probably an alien. Or a piece of an alien anyway. Maybe you have to knead baby aliens. Maybe that’s how they gestate. What? You don’t know.

I was supposed to knead until smooth, but it never really looked all that smooth to me, so I just stopped when I got bored. 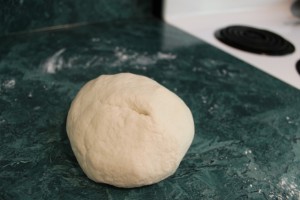 The hardest part of this whole thing was probably dividing the dough into 12 little balls because I was freaking out about trying to make them all the same size. I nearly brought out the bathroom scale. I probably would have if I thought it would actually help. But I guess I got them close enough. (Look at all the cute widdle baby aliens!) 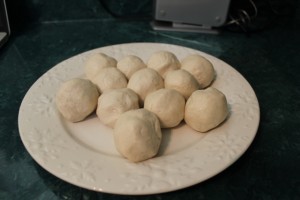 The instructions were then to let them sit for 30 minutes, which was just enough time for me to get through a little seshy-sesh with my Jillian Michaels DVD. (“Seshy-sesh” sounds cuter than 30-day-shred-of-TORTURE, so let’s stick with that.)

Do you see why I’m feeling like such a badass today? I worked out, y’all. Only for 20 minutes, true, but that’s 20 minutes longer than Tuesday or Wednesday, unless you count weeping as working out. (The Dutch movie was sad.)

I came back and prepared myself for battle, because the best battles always involve rolling pins and frying pans. (Dudes, I have a Pinterest board of that shit.) 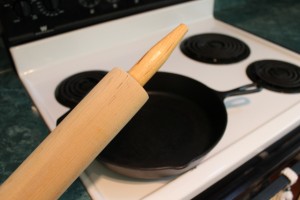 I will admit that I had some trouble getting started. It is deceptively difficult to roll a ball of dough into something resembling a circle. 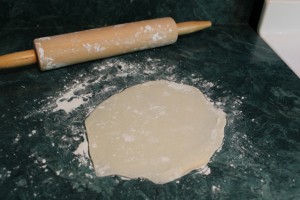 Most of mine resembled Mediterranean islands. One of them had a Florida.

And at first I didn’t have the heat turned up high enough on the skillet, so a couple of the first ones turned out sort of crusty and stale-ish. 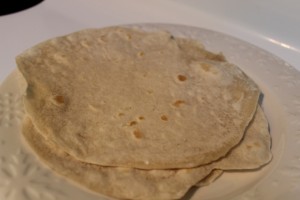 But, luckily, it turns out that once you get the heat set right, tortillas are really fun and pretty simple to cook. And they are much easier to flip than pancakes. 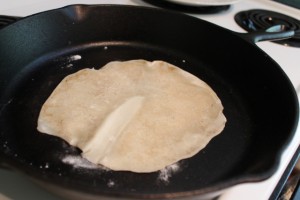 I was pretty fucking proud of myself before I even ate one of these because they looked so awesome and because I didn’t phenomenally fail right from the get-go.

I figured I better eat one, though, just to make sure I didn’t somehow cause them to taste like butt or something. I looked around for tortilla stuffing and all I found was cheese, so quesadilla it is. 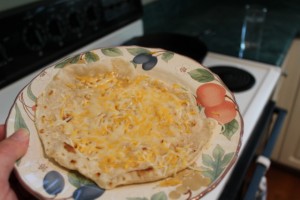 And I pretty much died and went to heaven… or hell, I guess, because God doesn’t let people in to heaven who use the phrase “motherfucking delicious.”

But they were. Motherfucking delicious, that is.